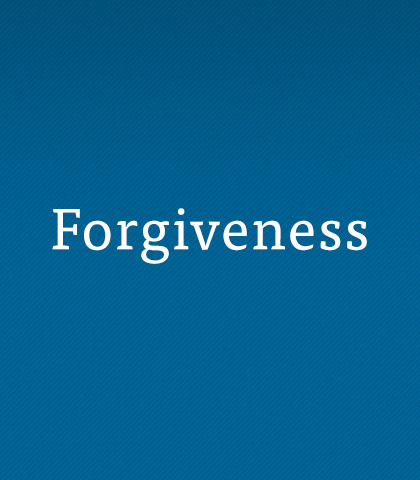 The word forgiveness draws various reactions. If we’re talking about God’s forgiveness of us, it can be a soothing topic resulting in gratitude and peace. If we need to seek forgiveness from someone we’ve wronged, we might wrangle a bit with our pride before we finally approach that person in humility—but our resulting cleared conscience makes it well worth the effort.

Usually, however, the most uncomfortable kind of forgiveness is what we must extend to someone who has wronged us or hurt us deeply. The Bible says a lot about this kind of forgiveness—perhaps because our emotions arm wrestle with it and other lingering memories skirmish with it. It’s really hard to do.

Find out what God’s Word says about forgiveness, how essential it is to understand, and how to actually do it...if we want to grow in our walk with God.

Resources on this Topic

Though seasoned in walking with God, Jacob remained a victim of his own carnal clumsiness. Instead of seeing the Lord’s hand of protection on his sons’ lives, he became paralyzed by fear, worry, and resentment. Jacob relied on himself rather than on God’s strength. And his reluctance to trust God almost led to disaster. Sometimes we tend to be just like Jacob—expecting the worst rather than trusting God’s best.

After seven years of blessing and abundance, the famine was in full bloom. People from the surrounding lands came to Egypt for grain—including Joseph’s brothers. Upon recognizing the men who threw him into a pit and sold him as a slave, Joseph faced a difficult decision. Would he be the type of person who remembers what he ought to forget and forgets what he ought to remember? Are you?

30 Days to Finding the Freedom of Forgiveness

Living in a fallen world of people where we all sin and have been sinned against means we all need forgiveness and to grant forgiveness.

How to Make Zero Progress This Year

Five proven time-wasters. Put these suggestions into motion, and your new year could set records in wasting valuable time. But on the other hand, who wants to do that?

Every new start arrives as a mixed blessing. With one hand we welcome them but pull back with the other. A clean page is welcomed because there are things on the previous page we might like to forget.

I grumble. I gripe. I have grievances. In the midst of my whining, something happened. Our family took a trip to a third-world country with Compassion. While we were there, God hit me with the shallowness of my outlook on life.

What to Do When You've Blown It

Too often, we end up saying “if only I had known then what I know now.” How deep the feelings of regret and anxiety in the hearts of parents who “blew it!” Since there’s no way to go back and relive our lives, we need to focus on the best way to respond to these painful memories. Otherwise, we will live under clouds of blame and shame and be paralyzed by fear.

It Takes Grace to Get Along

Do whatever you can to be at peace with all those around you. Practice forgiveness. Be helpful. Do little things, such as write letters of encouragement, or make a phone call or two.

How Do I Pray for My Enemies?

The key to loving our enemies is to consider God’s love for us.