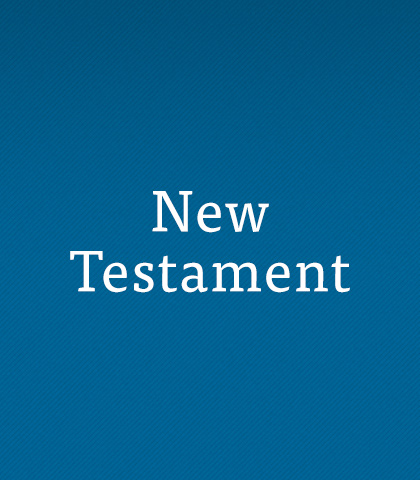 Do you ever struggle to understand how the Old and New Testaments fit together? If we think of the Old Testament as pages of promise, then how does the New Testament complete and fulfil God’s plan for us?

No fulfilment can surpass Jesus Christ, who burst onto the scene—and eventually left it—in a most dramatic and unexpected fashion. Learn what each of the four Gospels—Matthew, Mark, Luke, and John—teaches us about Jesus, and be encouraged by the first Christians who boldly proclaimed the name of Christ in the book of Acts. In reading the New Testament you’ll discover at the centre of your hope stands a person—One who has come and One who will come again.

Resources on this Topic

Water for a Thirsty Woman

Whether or not we like to admit it, we all struggle with prejudice…judging people based on their outward appearance. But Chuck Swindoll calls us to move past our assumptions, to reach everyone with the Gospel.

The Preacher Who Lost His Congregation

Often, in an attempt to seem humble, we’ll cut ourselves down or downplay our own abilities. But Chuck Swindoll reveals that self-degradation is not the same as biblical humility.

A lot of Christians refer to themselves as “born again believers.” But what does it really mean to be “born again?” Chuck Swindoll explains why our second birth is essential for spiritual life.

When Jesus first began His earthly ministry, large crowds followed Him…hoping to benefit from His miracles. But Jesus had a much bigger purpose in mind than merely entertaining the crowds!

Five Who Followed in Faith

When most of us think of the Apostles, we picture a sacred group of holy men who upheld remarkable standards.  But Chuck Swindoll suggests otherwise! The Apostles were just ordinary men who followed an extraordinary Saviour. And we can do the same!

A Man Sent from God

What does it really mean to be called “a man or woman of God”? Chuck Swindoll answers that question by describing a most unusual man named John the Baptist.

The Gospel of John takes a unique approach to the Christmas story. It makes no mention of the angels, shepherds, or wise men. Rather, John describes Jesus as the eternal Word that became flesh.

"That You May Believe"

Have you ever wondered why Scripture gives us four different accounts of Jesus' life? Wouldn't one Gospel have been enough? Chuck Swindoll answers this question in "That You May Believe."

Grace to the Very End

Leadership isn’t for the faint of heart—not because it’s so demanding (though it is) but because it’s so isolating. This was true of Paul. All his life, he was engaged in the nitty-gritty of ministry. But sitting in a dark dungeon awaiting death, loneliness crept into his lap and refused to leave. So Paul took his pen and wrote his friend.