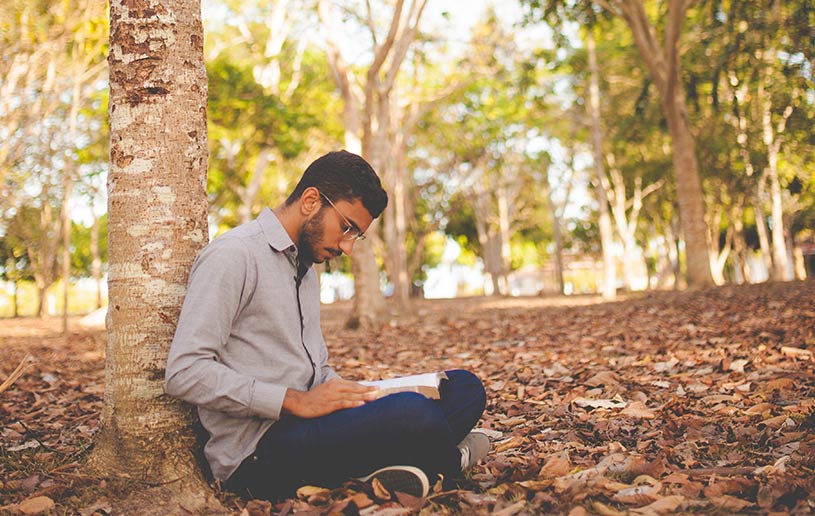 When nobody is around and when we're able to be absolutely honest with ourselves before God, we entertain certain dreams and hopes. We want very much by the end of our days to have ____________________ (fill in the blank). However, it may well be that we will die with that desire unfulfilled. Should that occur, it will be one of the hardest things in the world for us to face and accept. David heard the Lord's "no" and quietly accepted it without resentment. That's awfully hard to do. But we find in David's final recorded words a life-sized portrait of a man after God's own heart.

After four decades of service to Israel, King David, old and perhaps stooped by the years, looked for the last time into the faces of his trusted followers. Many of them represented distinct memories in the old man's mind. Those who would carry on his legacy surrounded him, waiting to receive his last words of wisdom and instruction. What would the 70-year-old king say?

He began with the passion of his heart, pulling back the curtain to reveal his deepest desire—the dreams and plans for building a temple to the Lord (1 Chronicles 28:2). It was a dream that went unfulfilled in his lifetime. "God said to me," David told his people, "'You shall not build a house for My name because you are a man of war and have shed blood'" (28:3 NASB).

Dreams die hard. But in his parting words, David chose to focus on what God had allowed him to do—to reign as king over Israel, to establish his son Solomon over the kingdom, and to pass the dream on to him (28:4–8). Then, in a beautiful prayer, an extemporaneous expression of worship to the Lord God, David praised the greatness of God, thanking Him for His many blessings, and then interceded for the people of Israel and for their new king, Solomon. Take some extra time to read David's prayer slowly and thoughtfully. It's found in 1 Chronicles 29:10–19.

Rather than wallowing in self-pity or bitterness regarding his unfulfilled dream, David praised God with a grateful heart. Praise leaves humanity out of the picture and focuses fully on the exaltation of the living God. The magnifying glass of praise always looks up.

"Blessed are You, O LORD God of Israel our father, forever and ever. Yours, O LORD, is the greatness and the power and the glory and the victory and the majesty, indeed everything that is in the heavens and the earth; Yours is the dominion, O LORD, and You exalt Yourself as head over all. Both riches and honor come from You, and You rule over all, and in Your hand is power and might; and it lies in Your hand to make great and to strengthen everyone." (29:10–12)

As David thought of the lavish grace of God that had given the people one good thing after another, his praise then turned to thanksgiving. "Now therefore, our God, we thank You, and praise Your glorious name" (29:13). David acknowledged there was nothing special about his people. Their history was one of wandering and tent-dwelling; their lives were like shifting shadows. Yet, because of God's great goodness they were able to supply all that was needed to build God a temple (29:14–16).

David was surrounded by limitless riches, yet all that wealth never captured his heart. He fought other battles within but never greed. David was not held hostage by materialism. He said, in effect, "Lord, everything we have is Yours—all these beautiful elements we offer for your temple, the place where I live, the throne room—all of it is Yours, everything." To David, God owned it all. Perhaps it was this attitude that allowed the monarch to cope with God's "no" in his life—he was confident that God was in control and that God's plans were best. David held everything loosely.

Next, David prayed for others. He interceded for the people he had ruled for 40 years, asking the Lord to remember their offerings for the temple and to draw their hearts toward Him (29:17–18). David also prayed for Solomon: "give to my son Solomon a perfect heart to keep Your commandments, Your testimonies and Your statutes, and to do them all, and to build the temple, for which I have made provision" (29:19).

This magnificent prayer contained David's last recorded words; shortly after, he died "full of days, riches and honor" (29:28). What a fitting way to end a life! His death is a fitting reminder that when a man of God dies, nothing of God dies.

Though some dreams remain unfulfilled, a man or woman of God can respond to His "no" with praise, thanksgiving, and intercession...because when a dream dies, nothing of God's purposes die.