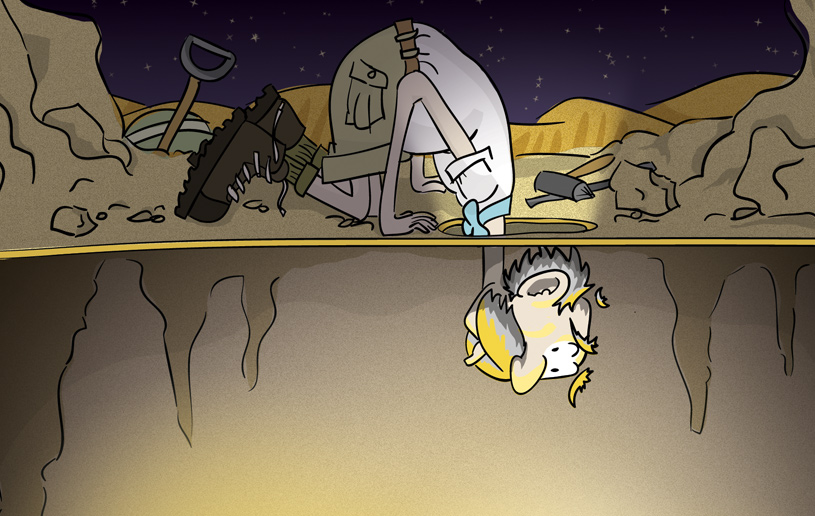 "Can you see anything?"

What a question to ask! Howard Carter's mouth and eyes opened wide when his aide asked it. He had stuck his head into a timeless tomb. Beads of perspiration popped out on the British archaeologist's brow. For six straight years, he had been digging. Endless trenches. Tons of rubble, rocks, and sand. Huge chunks of worthless debris. And he'd found nothing!

It was 1922. For more than a score of centuries, archaeologists, tourists, and tomb robbers had searched for the burial places of Egypt's pharaohs. It was believed that nothing remained undisturbed, especially in the Valley of the Kings where the ancient monarchs had been buried for more than half a millennium. Even though nobody felt there was anything left to be discovered, Carter continued his pursuit, privately financed, with only a few scraps of evidence to keep him going. Somewhere…somehow…he was convinced there was one remaining tomb. Twice during his six-year search he had missed by just two yards the first stone step leading to the burial chamber.

Can you see anything?

Peering into silent darkness, Howard Carter saw what no modern human had ever seen. Wooden animals, statues, chests, gilded chariots, carved cobras, unguent boxes, vases, daggers, jewels, a throne, the wooden figure of the goddess Selket…and a hand-carved coffin depicting on its golden lid a teenaged king. Everywhere was the glint of gold. It was, of course, the world's most exciting archaeological discovery: the priceless tomb and treasure of King Tutankhamun.

The tomb contained more than 3,000 objects, which took Carter about 10 years to remove, catalogue, and restore. “Exquisite.” “Incredible.” “Elegant.” “Magnificent.” “Ahhh!” must have passed his lips dozens of times when he first whispered his way through that ancient Egyptian house of the dead.

There are few joys like the joy of sudden discovery. Instantly forgotten is the pain and expense of the search, the inconveniences, the hours, the sacrifices. Bathed in the ecstasy of discovery, time stands still. Nothing else seems half so important. Lost in the thrill of the moment, we relish the inexpressible finding like a little child watching a butterfly on a blossom. Such discoveries have many faces:

Solomon wrote about the greatest discovery of all: the treasure of Scripture. He put it in words that remind us of the patient, determined searching of Howard Carter:

My son, if you will receive my words
And treasure my commandments within you,
Make your ear attentive to wisdom,
Incline your heart to understanding;
For if you cry for discernment,
Lift your voice for understanding;
If you seek her as silver
And search for her as for hidden treasures;
Then you will discern the fear of the LORD
And discover the knowledge of God.
(Proverbs 2:1-5 NASB)

Talk about a discovery! Hidden in Scripture are vaults of priceless wisdom that can be hard to find if you're preoccupied or in a hurry. But godly truth is there, awaiting discovery.

God's Word, like a deep, deep mine, stands ready to yield its treasures as you search, the Spirit is asking, “Can you see anything?”