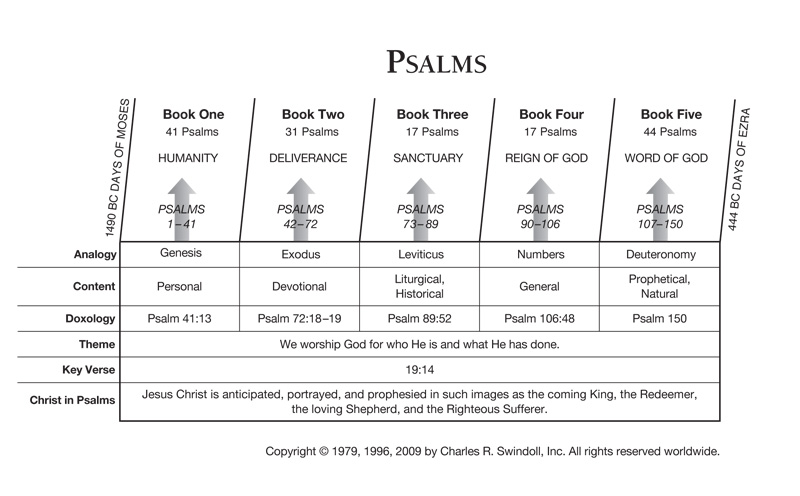 Psalms, a collection of lyrical poems, is one of only two Old Testament books to identify itself as a composite work containing multiple authors (Proverbs is the other). Some psalms name their author in the first line or title. For example, Moses wrote Psalm 90. David was responsible for many of them, composing 73 psalms. Asaph wrote twelve; the descendants of Korah penned ten. Solomon wrote one or two, and Ethan and Heman the Ezrahites were responsible for two others. The remainder of the psalms do not contain information about their authors.

The book was originally titled Tehillim, which means “praise songs” in Hebrew. The English title of “Psalms” originated from the Septuagint's Greek title Psalmoi, also meaning “songs of praise.”1

The psalms are organized into five books or collections. They were probably collected gradually, as corporate worship forms developed along with temple worship. It is likely that by the time of Ezra, the books of the Psalter were organized into their final form. Each section concludes with a doxology, with the entire Psalter capped by Psalm 150, a grand doxology.

WHY IS PSALMS SO IMPORTANT?

The psalms comprised the ancient hymnal of God's people. The poetry was often set to music—but not always. The psalms express the emotion of the individual poet to God or about God. Different types of psalms were written to communicate different feelings and thoughts regarding a psalmist's situation.

Psalms of lament express the author's crying out to God in difficult circumstances. Psalms of praise, also called hymns, portray the author's offering of direct admiration to God. Thanksgiving psalms usually reflect the author's gratitude for a personal deliverance or provision from God. Pilgrim psalms include the title “a song of ascent” and were used on pilgrimages “going up” to Jerusalem for three annual festivals. Other types of psalms are referred to today as wisdom psalms, royal psalms (referring to Israel's king or Israel's Messiah), victory psalms, Law psalms, and songs of Zion.

The psalms include unique Hebrew terms. The word Selah, found 71 times, is most likely a musical notation added by worship leaders after the Israelites incorporated the psalm into public worship. Scholars do not know the meaning of maskil, found in thirteen psalms. Occasionally, a psalm appears with instructions for the song leader. For example, we see instructions such as “For the director of music” (occurring in 55 psalms [NIV]); “To the tune of 'Lilies'” (similar references found in Psalms 45, 60, 69, 80); “To the tune of 'The Doe of the Morning' ” (Psalm 22); “To the tune of 'Do Not Destroy' ” (Psalms 57–59, 75). These and others can refer to melodies used with the given psalm or perhaps to suggestions for liturgical use.

WHAT'S THE BIG IDEA IN PSALMS?

The book of Psalms expresses worship. Throughout its many pages, Psalms encourages its readers to praise God for who He is and what He has done. The Psalms illuminate the greatness of our God, affirm His faithfulness to us in times of trouble, and remind us of the absolute centrality of His Word. As the Psalms present a clear picture of God lovingly guiding His people, the responses of praise and worship to God are never far from the psalmists' pens. The portrayal of worship in the Psalms offers us glimpse after glimpse of hearts devoted to God, individuals repentant before Him, and lives changed through encounters with Him.

Read Psalm 1, then Psalm 150. Thank God for allowing you to express your deepest emotions to Him. If you are hurting, use Psalm 13 as a guide and write your own lament to God. If you are rejoicing, meditate on Psalm 30 and echo the praise found there. No matter your circumstance, the psalms contain a corresponding word that will help you share your heart with the Lord.

Find resources in the book of Psalms in our resource library.