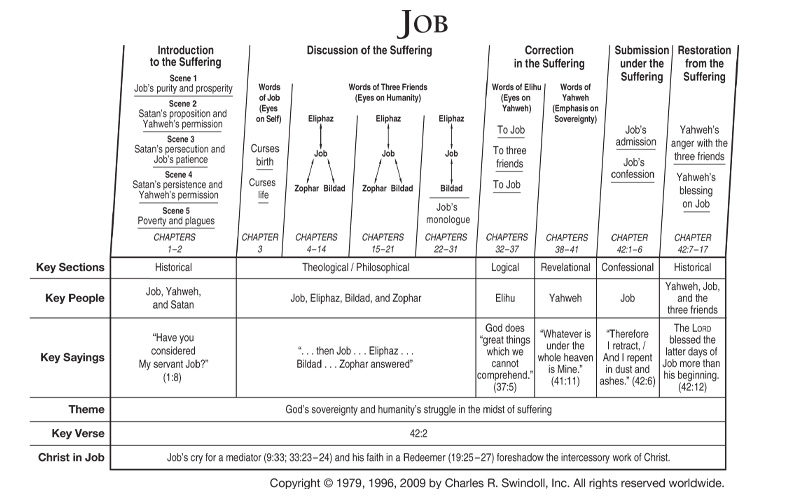 The author of the book of Job is unknown. Several suggestions have been put forth as plausible authors: Job himself, who could have best recalled his own words; Elihu, the fourth friend who spoke toward the end of the story; various biblical writers and leaders; or many editors who compiled the material over the years. While there is no definitive answer, it was most likely an eyewitness who recorded the detailed and lengthy conversations found in the book. In Old Testament times, authors sometimes referred to themselves in the third person, so Job's authorship is a strong possibility.

Who was Job? This wealthy landowner and father is one of the best-known biblical heroes. But we know little more than that he was stripped of everything, without warning, and that his faith was severely tested.

Though the text does not directly identify its setting, internal clues indicate that Job lived during the time of the patriarchs, approximately 2100 to 1900 BC. According to Job 42:16, Job lived an additional 140 years after his tragedies occurred, perhaps to around 210 years total. His long lifespan generally corresponds to that of Terah (Abraham's father), Abraham, Isaac, and Jacob. Also, Job's wealth was measured in livestock (Job 1:3; 42:12), as was Abraham's (Genesis 12:16). Like the patriarchs, Job used God's unique title “El Shaddai” (God Almighty). The book of Job does not mention the Mosaic Law; indeed, Job's daughters were equal heirs with his sons, and Job himself, though not a priest, offered sacrifices—things not possible under the Law (Leviticus 4:10; Numbers 27:8). Though we cannot be certain, Job may have lived during the time of Jacob or shortly thereafter.

Job lived in the land of Uz (Job 1:1), but no one really knows where Uz was located. Scholars believe it was outside of Canaan, near the desert because “the customs, vocabulary, and references to geography and natural history relate to northern Arabia.”1

WHY IS JOB SO IMPORTANT?

The Israelites categorized Job within their wisdom literature. The book includes language from ancient legal proceedings, laments, and unique terms not found elsewhere in the Bible. In addition, the majority of Job is written in parallel lines, which are indicative of poetry.

The book delves into issues near to the heart of every human who experiences suffering. The prologue provides a fascinating peek into the backstory—why God allowed Satan to afflict Job with such pain and turmoil. Then, through a series of dialogues and monologues arranged in a pattern of threes, human wisdom attempts to explain the unexplainable, until finally God Himself speaks.

The final chapters of Job record God's masterful defence of His majesty and unique “otherness”—of God's eternal transcendence above creation—in contrast with Job's humble and ignorant mortality. “Where were you when I laid the foundation of the earth? / Tell Me, if you have understanding” (Job 38:4).

WHAT'S THE BIG IDEA IN JOB?

Job's plight of undeserved suffering compels us to ask the age-old question, “Why do bad things happen to good people?” The answer given to Job may or may not satisfy the reader. God allows pain for good reason, but He may never reveal those reasons.

Job did not reject God, but Job did challenge and accuse Him. The Almighty quieted Job decisively when He finally thundered His own perspective on the situation. God did not answer Job's question of “Why?”—He instead overwhelmed Job and his friends with the truth of His majesty and sovereignty. Job came away with a deeper sense of God's power and splendour, trusting Him more:

Pain inevitably afflicts each one of us. Suffering is unavoidable in this life. Will your relationship with God be enough when trials come? Will you trust Him through your suffering? Read Job 38–42. Spend time with the Almighty. Pray for a stronger faith in the powerful Creator described in those chapters. Pray for a right perspective of Him so that you might see your situation through His eyes.

Instead of asking where God is in the midst of your pain, the book of Job affirms God's control and asks us, “Where are we in our pain? Are we trusting our Creator, even though we cannot understand our circumstances?”

Find resources in the book of Job in our resource library.