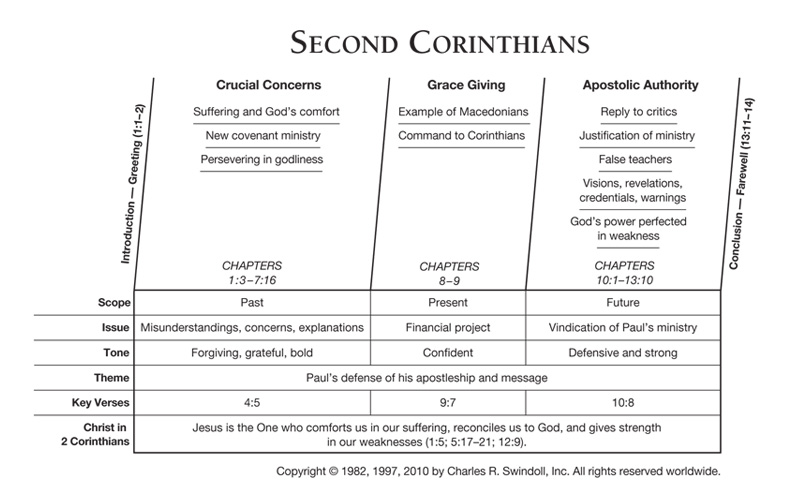 Paul wrote 2 Corinthians at a vulnerable time in his life. He had learned that the church at Corinth was struggling, and he sought to take action to preserve the unity of that local body of believers. The letter is riddled with personal comments as Paul revealed details about the persecution he had suffered for the sake of Christ as well as about a mysterious thorn in the flesh that kept him reliant on God.

After sending Timothy off from Ephesus to deliver the letter of 1 Corinthians, Paul, in his concern for the church, made a quick visit of his own to Corinth. Afterward, Paul returned to his work in Ephesus, where he wrote a sorrowful letter to the Corinthians that has not been preserved (see 2 Corinthians 2:1-11; 7:8). Paul then departed for Macedonia. Once there, he received a good report from Titus regarding the Corinthians (7:13), which led Paul to write a fourth letter to them, titled “2 Corinthians” in the Bible. (See 1 Corinthians [link to 1 Corinthians] page to read about Paul's first two letters to the Corinthians.) The apostle composed this letter near the end of AD 56, possibly in the city of Philippi.

WHY IS SECOND CORINTHIANS SO IMPORTANT?

This letter offers a great deal of personal insight into Paul's life that is not present in any other New Testament book. However, in chapters 8 and 9, his letter also clearly reveals God's plan for His people to give to others. Paul first focused on the generous example of the Macedonian churches, largely Gentile, who gave to their Jewish Christian brothers and sisters in Jerusalem. Then he exhorted the Corinthian believers to make donations of their own to the work in Jerusalem. Several realities about Christian giving become clear in these two chapters: Christians give generously according to, and at times beyond, their financial abilities; Christians give their money across racial and national lines; Christians who make commitments to give should follow through with those promises; and Christians should give cheerfully, rather than under compulsion.

WHAT'S THE BIG IDEA IN 2 CORINTHIANS?

The church at Corinth had recently been struggling with divisions and quarrels. But for a majority of the believers, the problem had been solved by the time Paul wrote 2 Corinthians. Many had repented of their sinful ways and had come back into unity with one another and with the leadership of Paul.

However, Paul still felt the need to articulate a defence of his apostleship and his message. Some in the church had apparently taken his meekness among them to be a sign of moral weakness or lack of authority (2 Corinthians 10:1-2). These accusations led Paul to defend himself by arguing that he was on the same level of importance as the other apostles, that he had deep knowledge of the Christian faith, that he had suffered profound physical punishment in the name of Christ, and that he had received visions and revelations from God (11:1-12:13).

Just as Paul wrote to the Corinthians in the wake of their repentance from divisions and quarrels, the message for today is clear: living in unity requires us to humbly forgive one another and to follow our leaders. Second Corinthians reminds us that even as Christians, we hurt each other and need to forgive those who wrong us (2 Corinthians 2:7). That Paul was willing to exhort the Corinthian believers to forgive those who had fallen away and repented, even as he defended his own apostleship against a vocal opposition, illustrates the apostle's commitment to this way of life among God's people.

In what ways do you struggle to forgive others and/or to follow your godly leaders? An overinflated sense of ourselves often leads us to strike out on our own or hold on to our frustration and anger regarding the choices of others. However, just as Paul reminded us of Jesus' ministry of reconciliation (5:17-19), we must seek to reconcile relationships in which disunity reigns. Look out for the pitfall of disunity with leaders and other believers in your own life while striving to live among all people in humility.

Find resources in the book of Second Corinthians in our resource library.