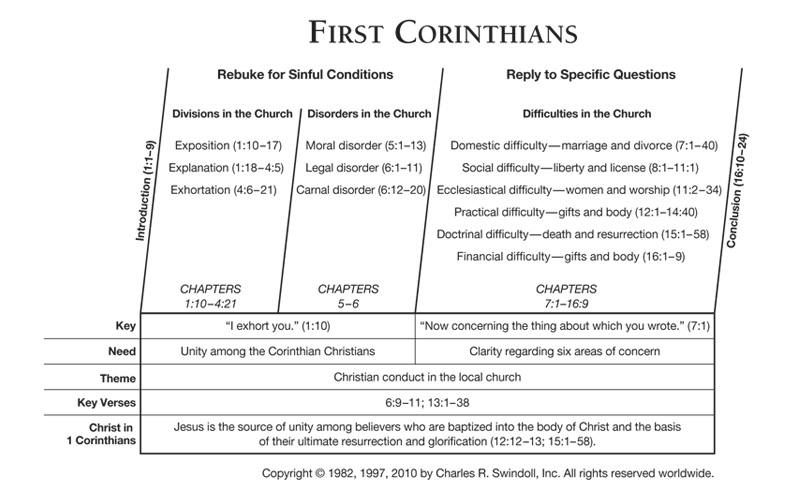 Four years prior to writing the letter we know as 1 Corinthians, the apostle had spent 18 months in Corinth, so he was intimately familiar with the church and many of its congregants. The recipients of the letter must have understood the letter's significance, not only to their own circumstances but for the church worldwide. In AD 95, Clement, the bishop of Rome, wrote a letter of his own to the Corinthians in which he invoked the authority of Paul's instruction in 1 Corinthians. Only a few decades after its origin, this letter to the Corinthians had travelled outside of Corinth and was considered authoritative beyond its initial Corinthian context.

Paul had been in Ephesus for more than two years on his third missionary journey when he received a disturbing report of quarrelling within the Corinthian church, a report he received from people associated with one of its members, Chloe (1 Corinthians 1:11). The church he had founded so recently (Acts 18:1-17) had already developed deep divisions, a situation that required immediate action. Paul penned his letter in AD 55, just as he was planning to leave Ephesus for Macedonia (1 Corinthians 16:5-8).

WHY IS FIRST CORINTHIANS SO IMPORTANT?

First Corinthians contains a frank discussion of the church and the issues that impacted real people in the first century. The Corinthian church was corroded with sin on a variety of fronts, so Paul provided an important model for how the church should handle the problem of sin in its midst. Rather than turn a blind eye toward relational division and all kinds of immorality, he addressed the problems head on. In his bold call to purity within the Corinthian church, Paul made it clear that he was willing to risk the good opinion of some in order to help cleanse the sin that tainted the church.

WHAT'S THE BIG IDEA IN 1 CORINTHIANS?

First Corinthians addresses reports that Paul received from Chloe's household, as well as a letter he received from the church itself (1 Corinthians 7:1). In this letter to the church at Corinth, Paul covered a number of different issues related to both life and doctrine: divisions and quarrels, sexual immorality, lawsuits among believers, marriage and singleness, freedom in Christ, order in worship, the significance of the Lord's Supper, and the right use of spiritual gifts; he also included a profound teaching on the resurrection.

The line of thought that joins these topics together was Paul's emphasis on Christian conduct in the local church. The apostle expected that Christian people would live according to Christian ideals, or as he told them, “You have been bought with a price: therefore glorify God in your body” (6:20).

Corinth was a large, international metropolis, filled with people from different backgrounds. Idol worship to gods such as Aphrodite was particularly prominent in the city, though Corinth contained numerous temptations far beyond her temples. In this sense, Corinth was very much like a modern urban area, containing unending opportunities to engage in sinful behaviour without any apparent consequences.

Such a community clearly had a negative influence on the Corinthian church. But notice that Paul's instruction to the believers was not to retreat from their city. This was not Paul's vision for the church then or now. Instead, he directed us to live out our commitment to Christ ever more faithfully in the midst of nonbelievers. Paul expected that we Christians would shine our light into the dark places of their world by worshiping in a unified community that was accountable to one another. He expected that we would settle our problems internally, that we would encourage one another in the pursuit of purity, and that we would strive together by holding tightly to the hope of our bodily resurrection to come.

What can you do within your local church to make this kind of community more of a reality?

Find resources in the book of First Corinthians in our resource library.