What Money Can Buy 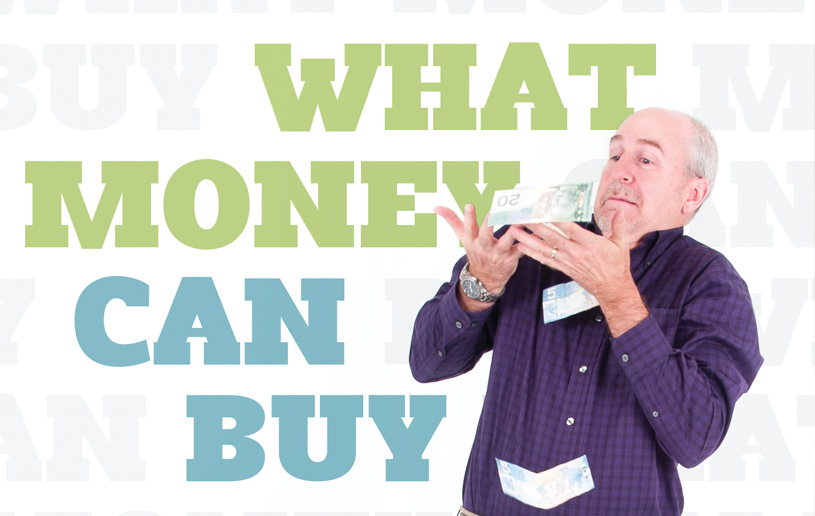 For six years, an Indiana couple made it their habit to look on the ground everywhere they went. They whacked their heads on a few tree branches, but the habit paid off. “We now have $400 in a container,” they told a reporter. Craig Davidson of Phoenix has them beat. He has found $5,170 while jogging. His wife verifies the claim. “Craig runs a lot more than the average jogger,” she said. Perhaps he will spend some of the money on a treadmill.

When I was about five, I found a quarter on a sidewalk one morning (probably made more than my dad that day!), and before rushing to the candy store, I ran home to show it to my mother. “I'm gonna look for money everywhere I go now,” I told her, gasping for breath. My wise old mother sat me down and told me a story about a man who found a $5 bill in a gutter and spent the rest of his life looking for more. According to my mother, he never saw the trees. He never saw the flowers. He never saw the birds. In fact, he missed a hundred rainbows and a thousand sunsets. All he saw was gutters. “I hope you enjoy that candy, Philip,” she said, “but remember...always look a little higher.”

Here are stories of friends of mine who have learned that looking a little higher helps us find the things money can and cannot buy.

“A few years ago our church sent a container of clothes to the Ukraine. We had a hundred dollars that we wanted to spend, so we found a store that would give us a good deal on a hundred dollars worth of wool work socks. Giving money away has made my life richer.”

“Five years ago my husband and I had 11 credit cards and a debt of $100,000. Today we are debt-free. For us the steps to financial freedom were simple but not always easy. First we quit spending more than we were making. Then we had a melt-down-our-plastic party. Then we paid God first (about 15 per cent), paid ourselves next (putting away 10 per cent each month), and paid the bills with what was left. We've had to downsize our dreams a little, but the nightmares have gone away. We've even had enough to give to some needy friends. Our lives are richer far because of it.”

“We're moving across town to the wrong side of the tracks this week. We're venturing into the Somali slums here in Nairobi. These past two years our lives have been richer because of these refugees. We have fed, clothed, and prayed with people who suffer daily more than I ever thought possible. In the discovery that life is harder than I'd ever imagined, I have also discovered that God is bigger and better than I'd ever imagined. We left a comfortable home in North America to offer the hope of eternity to suffering people. This has made our lives rich indeed.”

“A year ago we decided to quit eating out so much and use the money to support a needy child. We keep her picture in our dining room and pray for her almost every night. Our daughters write her letters and consider her a part of our extended family. It's tough not to feel rich when you're giving money away.”

“I noticed the other day that a widow in our town is working two jobs to make ends meet. I'm able to make some extra money, so we've started sending her what we can. She doesn't know about it, but our kids sure do. Often when they see some money come in, the kids want to know, “Can we give it away?”

“After many years of climbing the corporate ladder my marriage was failing. Then the company I had given so much to went bankrupt. To thank me for my years of dedication, they even bounced my last two paycheques. I've never been one to run from a challenge, so I decided to rebuild my home with God's help—one day at a time. My wife and I just celebrated our 23rd anniversary. Our son gave me a card thanking me for being his father and showing him how to be a man. In that moment all the effort was worth it. Without love there are only houses. Without my family I would have no home. I'm the richest man alive when I'm just Dad.”

Subscribe to our monthly magazine
Date:
April 29, 2011
Type:
Topic:
Back to Top