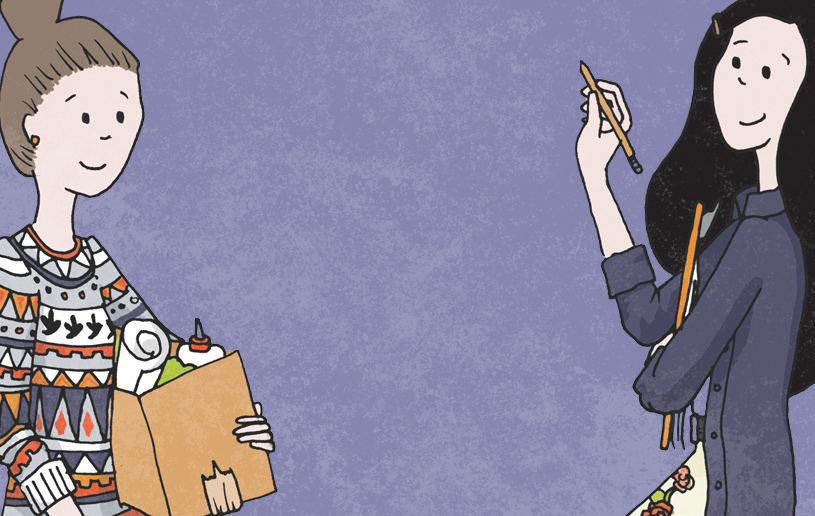 It’s not always easy being a big hotshot author. In fact at times it can get downright tiring. I was sitting with my wife in a restaurant and an autograph seeker came over. “Excuse me,” he said. “Would you mind...” I interrupted him. I said, “I’ll sign something, but do you mind waiting until after dinner?” The guy squinted at me and said, “What? I just wanted to borrow the salt shaker.”

One of the real perks of writing books is that people come up and tell you a joke or a funny story. Sometimes though, they tell you something that stops you in your tracks. One you can’t stop thinking about for days.

On a dark February night not far from where we live, 14-year-old Daniel Garrard took the family van out for a joyride, collided with a semi-trailer and was killed. Daniel’s mother Terra and his three siblings were devastated. As a single mother, Terra worked hard in a grocery store to make ends meet, but without a car and without hope, despair closed in around her.

Two teens, Katelin Allert and Amy Fitzpatrick worked in the grocery store alongside Terra. They are followers of Jesus. They wanted to do something. And so they landed on a crazy God-ordained idea.

Katelin’s father Gord called to tell me the story and asked me to get involved. He said there was no stopping them. The girls were hosting a fundraiser. Maybe they could raise enough to buy the grieving family some groceries. Maybe enough for an old van so Terra could drive to work.

First, the two asked the store manager to give them 500 dollars as a deposit for the best venue in town. He gladly opened his wallet. Next they began visiting business after business asking for an auction item or donation. Business owners eagerly agreed. “Before we went into each one we prayed,” recalled Katelin. “Only one in the whole city turned us down.”

Her father Gord is a guitar virtuoso. He plays on records, CDs too. Gord began inviting musician friends to come play at the event. Some hopped on planes. My friend, country star Paul Brandt donated an autographed guitar. I agreed to speak, but, let’s face it, I’m a humourist, what would I ever talk about?

When Katelin and her mother Liz told Terra of their plans, she was overwhelmed. “I have nothing to wear,” she said. So Liz and Katelin took her shopping. Terra hadn’t tried on new clothing in years. She couldn’t stop grinning. One day she found out about their love for God. “I don’t have a Bible,” she confessed. They found her one.

On a Sunday evening in June, 300 people gathered to support the grieving Garrard family in Cochrane, Alberta. Standing before them, I spoke of joy. How it invaded our lives amid our battle with epilepsy and Huntington’s disease. I told them of the peace we’d found in walking with Jesus, how happiness depends on what happens, but joy is rooted in faith. I prayed a prayer of blessing on Terra and her kids. And by the end of the night, we couldn’t believe it. Not only was ample money raised to help them. A local Dodge dealer handed Terra keys to a van.

During the next few weeks Terra asked questions. There were “Why” questions. But she also had some “Who” questions. Who causes people to love her the way they had? Who could comfort her in the lonely days to come? As the grief threatened to pull her into the darkness, Terra opened the pages of the Bible she’d been given. And found light and hope. Hope that God could somehow bring her through this horror. Hope that what she had seen in Katelin and Amy was worth having for herself. On a rock bottom day she called a minister. “I need to talk to you, now!” So Pastor Jason introduced Terra to Jesus.

I asked Katelin and Amy what effect this has had on them. They say they’ll never be the same. They have seen God at work. It spoils you for anything less. They’ve discovered that those who put others first, those who give cheerfully and without hesitation, receive more than they could ever have imagined. That even in the midst of great pain and tragedy, a sovereign God can accomplish eternal purposes. And sometimes, when you least expect it, He uses us in that process. They both agree that true joy comes in letting nothing stick to our fingers, in giving it all away.

Subscribe to our monthly magazine
Date:
July 18, 2013
Type:
Topic:
Back to Top