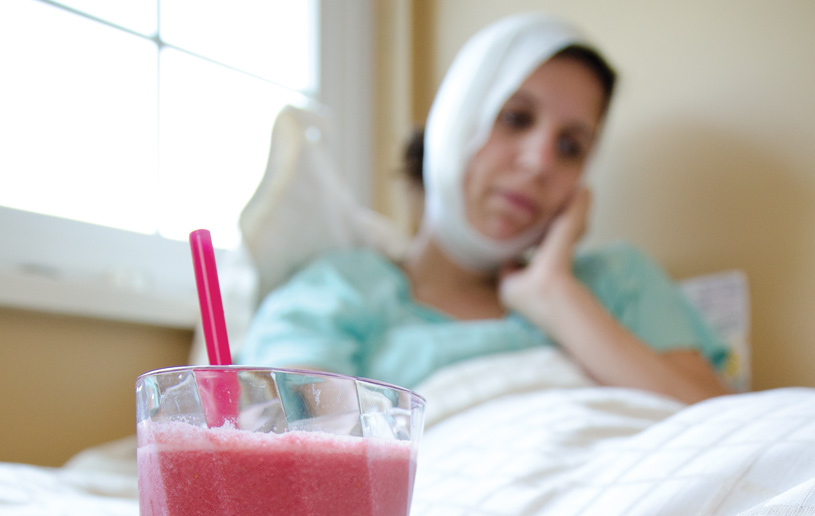 It was to be a three-hour surgery, and I would spend one night in the hospital. For the few days post-surgery, I would have no pain because my whole face would be numb. In about two weeks, I would back to normal. Or so I thought.

The day before the surgery I was shown a clay model of my teeth. The doctors had fractured it in seven places and put it back together with what looked like glue. My jaw would be held together by titanium plates. It looked to be a fairly straightforward procedure.

My husband was supposed to get a call after about three hours to come see me in the ICU but his phone didn't ring until after 10 long hours. When he arrived he saw two people. One lady was about 30 years older than me, and so a basic process of elimination suggested it was me in the other bed. I saw my husband pointing at me and felt relief to finally see him. Oddly, he didn't seem as relieved to see me. Rather, he stopped to talk to the nurse. Later he confessed that he didn't recognize me and was asking the nurse, “Is this really my wife?”

Nothing could have prepared us for what lie ahead. For the next four days, blood continually poured out of my mouth and nose, requiring me to get six blood transfusions and creating a drowning sensation every few minutes. The pain was so great that my body convulsed in agony, despite receiving the legal limit of morphine and practically drinking a bottle of children's Advil.

The blood and clots in my throat had me coughing all night. By the second night, I was nearly insane with exhaustion. After four days in the hospital, I was released, though I still needed 24-hour care for three days. When the worst of the pain passed, I opted to go off morphine “cold turkey.” It neither occurred to my husband nor me that I would go through a bout of detoxification. One week after the surgery, I woke up in tears. For the next 24 hours, everything upset me. I lost touch with reality and later, thinking I was living one massive hallucination, off I went to the hospital for a post-op visit in my husband's large, red housecoat.

The next week was another nightmare; the doctors wired shut my mouth. Completely. I could congest liquids only by syringing them down my throat through the opening behind my back teeth. By the end of the week my mouth was so blackened from not cleaning it I was literally sick from swallowing the foul bacteria.

I look back now and see how God prepared the way for me to survive this ordeal. I did everything I could. I brought everything I needed for the hospital stay—even a Brita filter to avoid the city water at the hospital!

But God's preparations far exceeded mine! As we drove into the hospital at 5:30 a.m. the morning of the surgery, I realized how anxious my husband felt. He hardly said a word, and his knuckles were white from clenching the wheel. In this moment of fear and anxiety, I walked into the admittance room, and there was a dear friend waiting. Within one minute, she had us laughing and completely relaxed. For an hour, she kept us peaceful and I daresay cheerful. After I went into the operating room, she stayed with my husband another hour, ensuring he was relaxed and calm before leaving.

God knew exactly what we would need. This same friend arrived early the next morning and sat with me all day, allowing my husband to go home and sleep for a few hours. She brought me a sheepskin so I would not get bedsores. She, along with others who came throughout the difficult two weeks that followed, took care of me steadily, hour after hour.

As I look back, I realize the surgery and recovery was far worse than I had anticipated. I thought I was prepared. My husband thought he was prepared. But I also realized through this ordeal that God's plans far exceed anything we can be prepared for. God had sent our friend to be a much-needed comfort and resource. God had scheduled a team of nurses the first two nights who showed patience and kindness far beyond normal expectations. Indeed, God carefully orchestrated every detail so I would be completely cared for.

Proverbs 16:9 teaches, “We can make our plans, but the Lord determines our steps.” Humans are designed to plan, but our knowledge is limited. We can trust that God is preparing things in ways we can't imagine, and we can trust Him with our future.

I might not know what is coming, but God does and He will take care of me.