Opening a Can of Evangelism 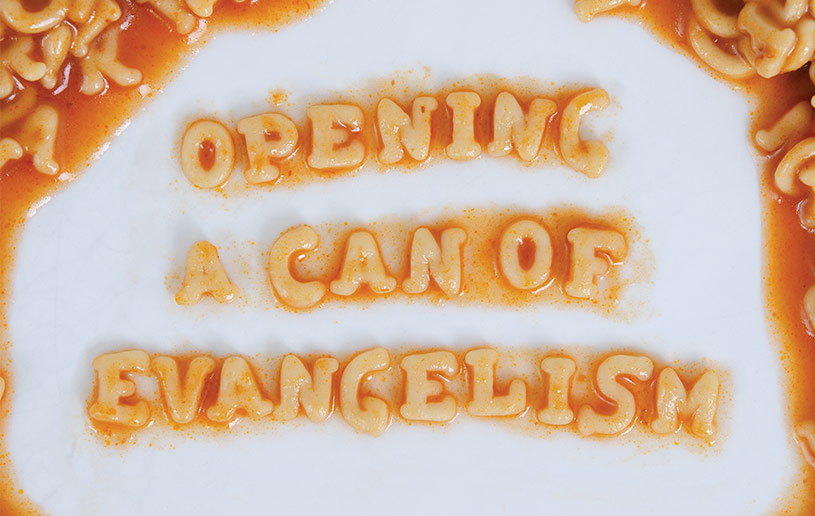 I’m not a big fan of “canned” evangelism. By canned I mean impersonally manipulating conversations so you can dump your theological truckload on some unsuspecting lost soul. Entire ministry dynasties have been built around it, but it makes me uncomfortable.

Here’s why. Think of when David was given Saul’s armour to wear to fight Goliath (1 Samuel 17:38-39). It was the canned “one-size fits all” approach to battle. Had David worn the armour he would have failed, since fighting Goliath required him to move freely. Similarly, personal evangelism—like hand-to-hand combat—requires the freedom to strike strategically.

Perhaps because we are flesh and blood we can easily forget the spiritual dimension in evangelism. We may think the way to be most effective in evangelism is by being able to use reason and sound arguments to convince someone to think differently about their relationship to Jesus Christ. While that is important, being able to give a reasoned approach to faith is only a part of the equation.

One of Satan’s main objectives in his war against God is to keep unbelievers from coming to faith in Christ. Second Corinthians 4:4 says, “Satan, who is the god of this world, has blinded the minds of those who don’t believe. They are unable to see the glorious light of the Good News. They don’t understand this message about the glory of Christ, who is the exact likeness of God.”

Satan uses the weapons of lies and deception to attack, blind, and hold people. Engaging in evangelism means engaging in spiritual hand-to-hand combat for the souls of men and women, boys and girls. It is personally storming the strong man’s house to free his captives. Ephesians 6:17-18 says our weapons to free the captives are truth (“the sword of the Spirit, which is the word of God”) and prayer in the Spirit.

In many, if not most, cases the fight to lead someone to freedom and faith in Christ is a battle of inches. It’s one step at a time. It is a series of hard-fought decisions over biblical truth, sometimes taking place over the span of years, with each one building on the previous one until the decision to repent and believe on Christ as Saviour and Lord is reached.

Is this biblical? Compare the tactics of Philip with the Ethiopian eunuch (Acts 8:26-39) and those of Paul with the Athenians (Acts 17:16-34). The eunuch feared and worshipped the God of Israel and accepted the Old Testament as God’s Word but he was blind to Jesus as Messiah. When Philip explained the truth about Jesus, the Spirit opened the eunuch’s eyes and he believed and was baptized.

When Paul spoke to the Athenians, who were at a different place spiritually, he couldn’t start where Philip did. He had to start with basics: declaring God as the Creator and man’s accountability and judgment by Him at the Resurrection. Many Athenians were still deceived, blind, and stuck on the point about Resurrection. But some weren’t. The Spirit opened their eyes and they believed.

Satan’s blinding and captivity are personal. Unbelievers are deceived about different things. The lie that is holding one captive may not be the same lie that is holding another in its grip. And so, our advance with truth must likewise be personalized. If someone is captive to the lie that God doesn’t exist, we cannot ignore that and open a can of “God loves you and has a wonderful plan for your life.” Blindness to the existence of God and indifference to His claims are the particular battleground. We have to gain that piece of ground before progressing on to other truths.

Approaching evangelism in this way means fighting one truth-battle at a time, rather than trying to wage the whole war at once. It also puts the personal back in personal evangelism.