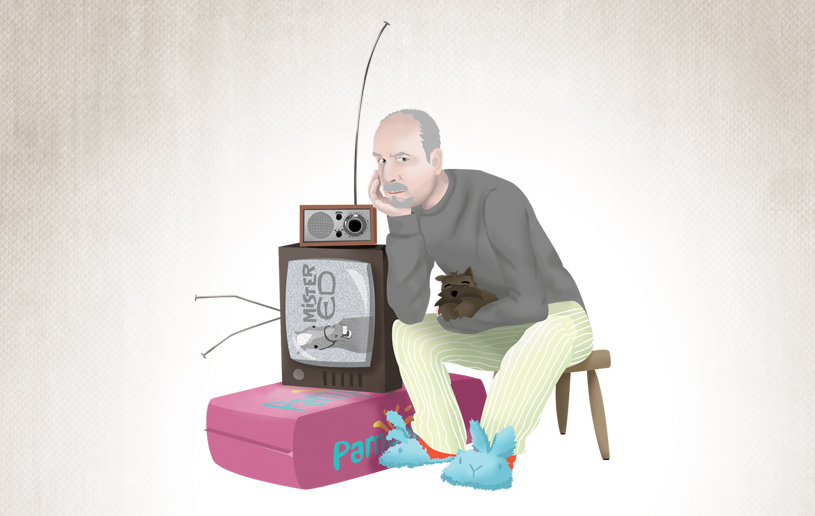 A younger friend called and sang the B.J. Thomas song, “Hair Plugs Keep Fallin' Off My Head.” I hung up on him. Everything's funnier when you're young and 50 is still a black hole, an undiscovered continent awash in snow, ice, and woolly mammoths. Sure I have a few rust spots, an over-inflated tire, and my headlights are a megawatt too dim. But today I feel pretty chipper and last I checked today was all they give you here at The Home.

Even my dog is old. Moments ago Mojo III fell asleep sitting on my lap and were it not for my lightning reflexes, she would have hit the floor. I think I pulled some fat saving her life. I'm at the age where your muscles still don't have the good sense to lie dormant. I play softball because my son asks me to then spend the winter nursing Achilles tendons that feel like they're being chewed on by a pack of rabid Chihuahuas.

The year I was born Mr. Ed, a talking horse, made his television debut, as did ads for the electric toothbrush, FM Stereo, and a redundant little accoutrement sure to fail: Pampers. In the fifties, people paid good money to watch nuclear explosions at close range, and more doctors smoked Camels than any other cigarette. But come the sixties, we got serious. We learned how to survive nuclear fallout by hunkering beneath school desks, and the Canadian Medical Association admitted that, by golly, smoking just may cause lung cancer and doctors should point the way by butting out.

Two friends from my era just informed me they didn't celebrate their birthdays this year—didn't even have a wake, just opted to ignore the doorbell and see if the visitor would go away. Another friend calls it the 20th anniversary of her 30th, but I call it 50 and have decided to enjoy it for at least four reasons:

This longing to be with Jesus doesn't mean I do silly things to get there faster or that I'm content to leave the world as it is. But hope bubbles to the surface more quickly than it did even a year ago. C. S. Lewis wrote, “It is since Christians have largely ceased to think of the other world that they have become so ineffective in this one.” And so this hope beckons me to do something lasting here.

I can truly say—without medication—that I love 50. I can stay up as late as I want now. Sometimes until 8 p.m. My parents don't tell me what to do anymore, though other people do. Last week both the police and the doctor told me to slow down.

Subscribe to our monthly magazine
Date:
January 24, 2012
Type:
Topic:
Back to Top