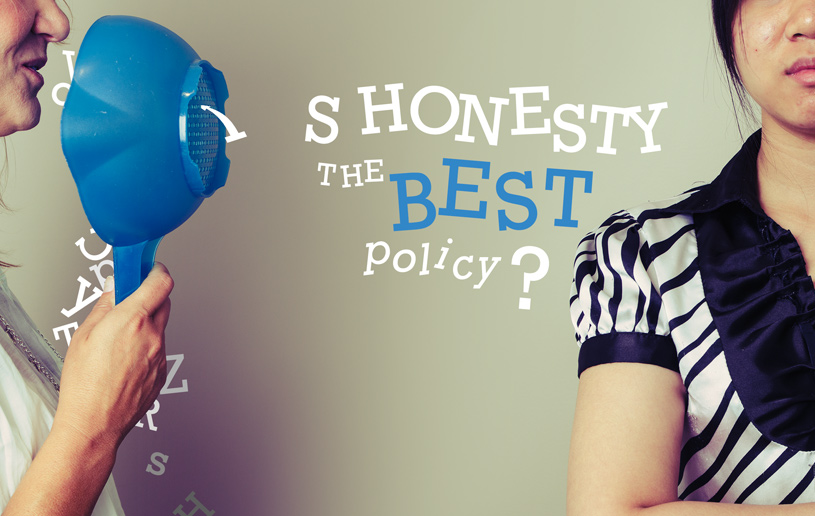 Ask any Christian and she will tell you followers of Christ should always be honest. Simple. No ifs, ands, or buts about it.

I've been thinking about honesty and concluded a couple of things. First, it's a concept we need to understand better. I don't think most of us have thought about it too much because it seems so simple. And second, to be perfectly honest, honesty is not as simple as I had first thought.

It seems to me honesty is a core characteristic. The word “honest” originates from a Latin word meaning “honourable, respected.” It later came to mean, “free from fraud” and now has the main modern sense of “dealing fairly, truthful.” Honesty is the quality of being genuine and uncorrupted. And from that core, like the trunk of a tree, it branches three ways:

So are we as Christians honest?

In my opinion, I think most Christians are generally honest when it comes to big sins. Most aren't blatant thieves out robbing banks and stealing cars. But I wonder if it might be a different story when it comes to income taxes, pilfering supplies from work, fudging on the time clock and giving an honest day's work for an honest day's pay. What about keeping up appearances of spirituality when the reality may be different?

When it comes to honesty in our thoughts I believe we are all prone to some self-deception. We tend to not see our hearts and actions as God does. He knows us better than we know ourselves. Although God gives us a new heart when we are born again, we still sin and might not even realize it.

Honesty in speech is even more difficult. It means telling the truth without deceiving, so some Christians think that means you have to say what you really think all the time. They're unfiltered because, after all, they're just being honest.

Other Christians are notorious because to them total honesty means total disclosure of their feelings—letting it all hang out as they vent to everyone in earshot. You may not like what they express, and may even hurt, but, as they say, they're just being honest.

Is that what being honest in our speech means? Is it always candid and unedited? Is that brutal honesty? Is total expression of one's true feelings always necessary? Is it honest that because you think or feel it you have to say it and would it be dishonest if you didn't? When it comes to honesty in speech should we be unfiltered and if not, what is the filter? Is total honesty in the sense of full disclosure always the best policy? When is it right to control information? Do people always have a right to know?

Scripture has much to say about our speech (e.g. James 3:1-9; 1 Peter 3:10). Most of it is about the need to control it. Like a horse needs a bit, so we need something to control our tongue. Having a free rein with our speech is not biblical, even if we think it's honest. And there are definitely lines drawn as to what is disclosed. The fact that Scripture doesn't titillate us with salacious details tells us disclosure should be limited.

We should also note that while feelings are real, they might not be valid. Feelings are usually responses to our perceptions, but our perceptions may not be true. Many think they are being honest when they express what they believe to be true perceptions. The problem is not with their honesty it's with their accuracy. It almost seems it's possible to be totally honest and yet dishonest at the same time.

Summing it all up, here is the filter I believe we need to have on our sometimes-brutal honesty: we are to speak the truth in love and only that which will build others up (Ephesians 4:15, 29). Love is our filter. Love for God and others. Simple, but not easy. So love God and say, do, and think, what you want. That's the best policy. Honest.