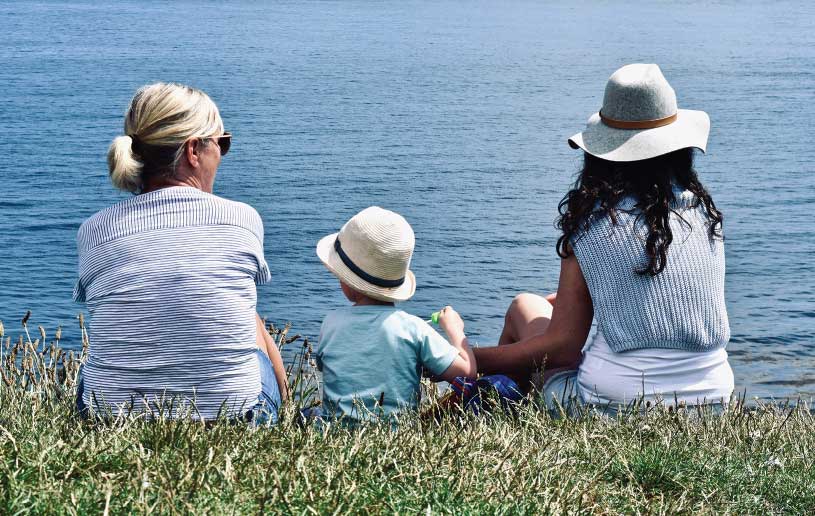 It’s bad enough that, until recently, Webster omitted “parenting” in his dictionary...but continuing to disregard “grandparenting” is somewhere between incompetent and inexcusable! OK, OK, so it isn’t an official word. So it lacks sufficient roots in Anglo-Saxon linguistic lore to merit a position in the ranks of Webster’s major reference work. So who cares about all that stuffy pedigree through which terms must pass to earn recognition in the verbiage of our American culture? I sure don’t...and neither do thousands of other conscientious folks who are doing the very thing Webster chooses to ignore.

Webster—the old codger—would’ve been a good stand-in for Scrooge. Or maybe he was like the late W. C. Fields and just didn’t like kids. On the other hand, he probably played everything by the rulebook and didn’t let his emotions get in the way of his literary contribution.

Too bad. Guys like that may make great scholars, but little people who are looking for laps to sit on and hands to hold and somebody to sing with or help ’em learn how to skate don’t give a rip about advanced degrees earned at snooty schools or grammatical trivia. So what if the grey-haired gentleman or gracious lady splits an infinitive or leaves a preposition dangling? What’s really important is that the wee ones know that here’s somebody they can lean on, talk to, laugh with, learn from, walk beside, and, mainly, hug. And chances are good those same grown-ups won’t ask a lot of pin-you-to-the-wall questions, like “Did you make your bed?” or “Have you finished your homework,” or “Isn’t it your turn to do the dishes?”

Grandparents’ favourite gesture is open arms and their favourite question is, “What do you wanna do?” and their favourite words are “I love you, honey.” They don’t look for mistakes and failures; they forgive them. They don’t remember that you spent your last dollar foolishly; they forget it. And they don’t skip pages when they read to you...nor do they say “Hurry up” when you want to see how far you can make the rock skip across the lake. They’ll even stop and lick an ice cream cone with ya.

But best of all, when you want to talk, they want to listen. Long, loud lectures are out... so are comments like “You ought to be ashamed of yourself” and “That’s stupid!” It’s funny, but you somehow get the impression that things like money and possessions and clothes aren’t nearly as important as you. And getting somewhere on time isn’t half as significant as enjoying the trip.

Grandparents. What amazing gifts from God. Generation after generation He provides a fresh set of them...an ever-present counterculture in our busy world. Lest everyone else get so involved they no longer stop to smell the flowers or watch tiny ants hard at work, these special adults are deposited into our lifestyle account. They’ve made enough errors to understand that perfectionism is a harsh taskmaster and that self-imposed guilt is a hardened killer. They could be superb instructors, but their best lessons are caught, not taught. Their Christianity is seasoned, filtered through the tight weave of realism, heartache, loss, and compromise. Jesus is not only their Lord, He’s their Friend and longtime Counsellor. Like a massive tree, they provide needed shade, they add beauty to the landscape, and they don’t mind being used. They’re there. Even if not much is happening, they are there.

Why all this surge of what some would call sentimentality? Well, my life took on a new dimension some years ago. Another hat was added to those I was already wearing. It’s one that has become increasingly more significant as time passes, I realize. Ryan Thomas was born to our older son and daughter-in-law. A six-pound, eight-ounce grandson who provided my wife and me a chance to try again...only this time with a lot more to give and a lot less to prove. Stretching out in front of us are an uncertain number of years in which we’ll be able to reinvest our time and energy, our treasure and love. And even though Webster won’t acknowledge the word, grandparenting is ours to enjoy...thoroughly and continually.

It was back in 1961 that God first allowed us to call ourselves parents. How gracious of Him to give us a new title—grandparents. I remember reading back then the words of General Douglas MacArthur, entitled, “A Father’s Prayer,” a beautiful piece in which the aging leader asks God to build him a son of strong character, humble spirit, a person of compassion, determination, simplicity, greatness. His closing words almost brought tears to my eyes. After claiming all these things by faith, he adds: “Then I, his father, will dare to whisper, ‘I have not lived in vain.’”

Today, the same prayer is on my lips and actual tears are on my face. The prayer is for you, Ryan, as it once was for your daddy. And the tears? Well, you’ll have to get used to them.

That’s how it is with granddaddies.

Subscribe to our monthly magazine
Date:
September 10, 2019
Type:
Topic:
Back to Top