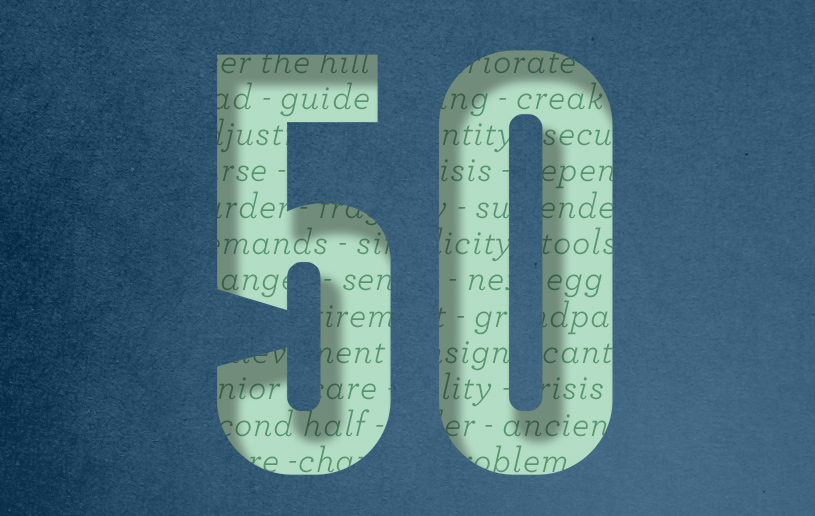 Look in the mirror. That's right, you're getting older. So am I. More are entering senior years than ever before, and we are older longer than past generations.

Frankly we are not aging well. We dread it. Society has us convinced that getting older is a curse. So, we try to cream away our wrinkles, comb over our bald spots and worry whether our health and money will last as long as we do. Is this how we want to walk into our senior years: laden with fears and clinging to yesterday? God considers long life to be a blessing (Deuteronomy 6:2), but we get half way and experience a mid-life crisis. There is a better way.

THE SECOND HALF IS HARDER THAN THE FIRST

The first half of living is about going from dependence to independence. We get an education, find a career, buy a home, and raise a family. Life's demands in the first half are hard, but still, the second half is harder.

In the second half we face physical changes. Our bodies creak and pop, even in good health. Fragility and frailty are twin causes for too many trips to the doctor. Our world gets smaller in the second half. We move from a four-bedroom home to a more manageable condo, then a single room in a care facility and ultimately a box. We surrender control in the second half. They will take away my car keys, ask for my bank pin number, and make decisions, which once were mine alone. And then, we confront the ultimate fear, our own mortality.

I'm not morose about aging—just honest. In the first half of living we move from dependence to independence. In the second half we move back to dependence. The second shift is harder than the first.

THE SECOND HALF OF LIVING REQUIRES AN ADJUSTED GAME PLAN

Every sport team knows that winning requires adjustments in the second half. So too in aging. The second half is not simply a repeat of the first half. The early side of 50 is about identity, security, acquirement, and contribution. We employed a set of tools to achieve that. Yet, in the far side of 50 we face a different set of issues. We move from certainty to mystery, complexity to simplicity, doing to being, achievement to significance. The tools we've used aren't sufficient for the second half. We need a new set of tools.

THE SECOND HALF OF LIVING IS ABOUT GOING DEEPER

Paul speaks of the body failing but the spirit thriving—so don't lose heart! (2 Corinthians 4:16). Is that what you see around you? Within you? As we age, many reverse that order. We fight to maintain the strength and appearance of youth, but grow angry and fearful of heart. We need a new work of God—a new set of tools. The second half of living is about moving from the external to the internal. It's about going deeper with God. The changes of age are not threats. They are God's invitation to a spirituality rooted deep within our souls. They're God's method to strip us down to what matters.

I recognize that there's a grey tone to these paragraphs, so let me add some colour! Since you are getting older…

Smile at birthdays. Getting older is better than not getting older! The second half holds great delights. (Did I mention grandchildren?) Engage your mind, keep physically active, but nurture your soul.

Those on the far side of 50 are trailblazers. Families and churches could use more models of senior grace, peace, and joy. Seniors are in front, show us the way.

We are not cheese that improves with age. Aging won't fix us; it reveals us. What we are now, we will be in the second half—only more so! If you don't want to be a grumpy senior, the time to change is today.

It sounds like a cliché, but the best is yet to come. The far side of 50 is a good place to be. Despite the losses, aging is not about losing. Listen to the Psalm writer.

So even to old age and gray hairs,
O God, do not forsake me,
Until I proclaim Your might
to another generation,
Your power to all those to come.