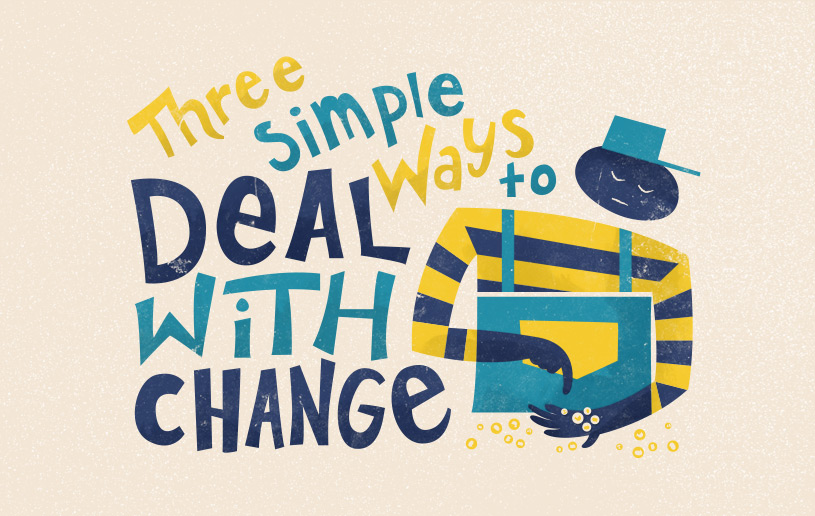 Faced with overwhelming decisions to make in an uncertain economy, young adults are forced to deal with stress and change like no other age group.

These are labels attributed to young Canadians, who are transitioning from one stage of life to another. They are hopeful, proud words, indicating approval from older generations.

However, other labels like divorced, downsized, and in debt are perhaps more accurate descriptions of the world 20-something’s are discovering. The shock is enough to send these optimistic fresh faces back to the stability and structure of university. Or back to their parents’ basement suites.

Change is inevitable—and it can’t be controlled. How you choose to deal with change will determine your success in life. Here are three ways to approach change at any age.

When transitioning from one stage of life to another, or when sudden change hits, it’s easy to feel overwhelmed and alone. This is not the truth. Often an attitude adjustment will help you see life not as something to be endured but something to be lived.

Caleb’s model in Numbers 13 and 14 is a great example to follow. Twelve scouts were sent to explore Canaan, also known as the Promised Land. Upon their return, the spies reported although the land was magnificent, it was protected by massive, fortified cities and more than seven nationalities of sworn enemies who were settled throughout the country. Giving in to fear, the spies spread discouragement throughout the camp, saying the Israelites didn’t stand a chance—the people were so huge the Israelites were like grasshoppers in comparison (Numbers 13:33).

Of the spies, only Caleb chose to rest in God’s assurance—that this was the land promised to the Israelites. Caleb said, “Let’s go at once to take the land…We can certainly conquer it!” (Numbers 13:30). Although the task was overwhelming and seemed impossible, Caleb chose to believe God was bigger than giants, was stronger than fortified cities, and would keep His promises.

Trials will certainly come. But just as certain, God will be with you. Once the worst has passed, you are left with a choice: mind over matter or vice versa? Hebrews 13:5 repeats the promise Moses gave to Israel when Joshua was appointed their leader. Moses said Joshua would be the one to take them into the Promised Land, where they would conquer their enemies. “Be strong and courageous! Do not be afraid of them! The LORD your God will neither fail you nor forsake you” (Deuteronomy 31:6).

Trying to deal with life changes solo is wearing and can leave you feeling isolated and alone in your situation. But this is simply not true; you are never alone (John 16:32). Commit your problems, fears, and situations to the Lord and trust Him to give you what you need.

Another way to deal with life change is by accessing the social networks you’re already connected with.

Social networks are a vital part of a young adult’s online experience. However, they exist not only in the virtual world—neighbours, hobby groups and religious organizations are also valuable resources.

In 2008, Statistics Canada released a survey on change.1 It found 57 per cent of Canadian adults aged 20-29 experienced a major life change. Overall, these changes were seen as a positive experience and respondents said they used many parts of their social networks to deal with the change.

Young adults typically access several networks when dealing with change finding they offer support, guidance, advice, and perspective. However, 47 per cent of young adults who are building careers and/or families prefer to use the Internet as a primary resource, turning to other people second. As for external resources, these same people said they’re less likely to use neighbours or religious organizations than government resources while going through a transition.

The report said the most frequent types of transition were financial, employment, health, parenting, child care, and caring for the sick or disabled. These statistics separate young adults from older generations, who are more likely to seek out the opposite resources when going through life changes.

Although the way we reach out has shifted, young adults still rely on the help of others when dealing with change. The more we can be aware of how they are reaching out the better we can be in a position to support them in their time of need.