Miss Petty and the Grudge 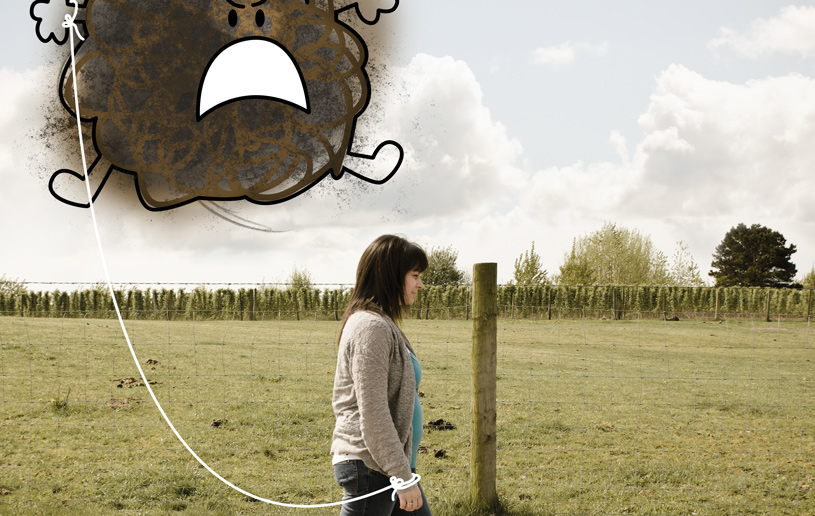 I've always imagined a grudge as something like a brownish-grey blob, which follows you around like a cloud, feeding off your feelings of resentment and ill will towards whoever has insulted you. The more you hold on to those feelings, the bigger the grudge gets, until it is strong enough to take its own form—no longer relying on your feelings but generating his own, and influencing your actions. In short, the grudge becomes the Grudge.

Recently I had an encounter with the Grudge when I felt a friend had snubbed me. She failed to show at an event and didn't even call to explain! In fact, I didn't hear from her for so many days following the missed event I began to wonder if I was being avoided. How rude!

Feeling snubbed is one thing but seeing as she didn't even have the guts to apologize, my perceived injuries festered and I could feel the Grudge eagerly lapping up my feelings of injustice. But I didn't care. I had been wronged and by George I wasn't going to be the one to end the standoff. After all, I was the one being snubbed! Maybe at first I would've been willing to overlook the offense—there was probably a good explanation for her absence and perhaps even for the lack of notice. But to completely avoid me, well I couldn't overlook that. And the Grudge continued to grow...

I impatiently waited for an apology, so my friend could know my Grudge, but it never came. As the days passed my Grudge got bigger, but I didn't feel any better.

One of the more convicting teachings regarding grudges is found in Mark 11:22-25. The Message paraphrase says it like this.

Jesus was matter-of-fact: “Embrace this God-life. Really embrace it, and nothing will be too much for you. This mountain, for instance: Just say 'Go jump in the lake'—no shuffling or shilly-shallying—and it's as good as done. That's why I urge you to pray for absolutely everything, ranging from small to large. Include everything as you embrace this God-life, and you'll get God's everything. And when you assume the posture of prayer, remember that it's not all asking. If you have anything against someone, forgive—only then will your heavenly Father be inclined to also wipe your slate clean of sins.”

Holding a grudge against another seems like a sure-fire way to separate yourself from an effective prayer life and, thus, a healthy relationship with God. As well the concept of a grudge flies in the face of Jesus' example of living magnanimously—being gracious and noble in spirit, and doing right even when others treat you poorly.

Jesus tells a story about an unforgiving debtor where a man was forgiven a great debt by the king. This man, who would never have been able to repay what he owed, then turns around and demands a debt repayment from another man. Even though the first man had been shown great mercy by the king, he had none for the man who owed him money. When the king heard about it he was understandably angry and said “Shouldn't you have mercy on your fellow servant, just as I had mercy on you?” (Matthew 18:33) Jesus then says that's what our heavenly Father will say to us if we refuse to forgive others in our hearts.

In my heart I knew my self-righteous standoff was petty and immature. But in order to end the madness I had to be the one to break. And that meant humbling myself.

Talking about being humble is simple, but it takes practice to actually be humble. And of course it's always in times of extreme pride the words of 1 Peter 5:6 especially sting. “Therefore humble yourselves under the mighty hand of God, that He may exalt you at the proper time” (NASB). Once the still, small voice of God nudged those words into my mind and heart I knew my loitering with the Grudge must come to an end. I needed to stop feeding my Grudge, I needed to ask God for forgiveness, and I needed to make things right with my friend.

In order to do this I knew I had to completely drop my hurt feelings, stop being Miss Petty, and remember we were actually good friends, and something as silly as a missed party should not change that.

And besides, if people like Joseph (Genesis 45), David (1 Samuel 24), and the Good Samaritan (Luke 10:27-37)—people who had been wounded so much deeper than I had—can forgive couldn't I oversee this tiny thing? What made these Bible characters great was not their Grudge, but their Grace. Didn't I want the same for my life?