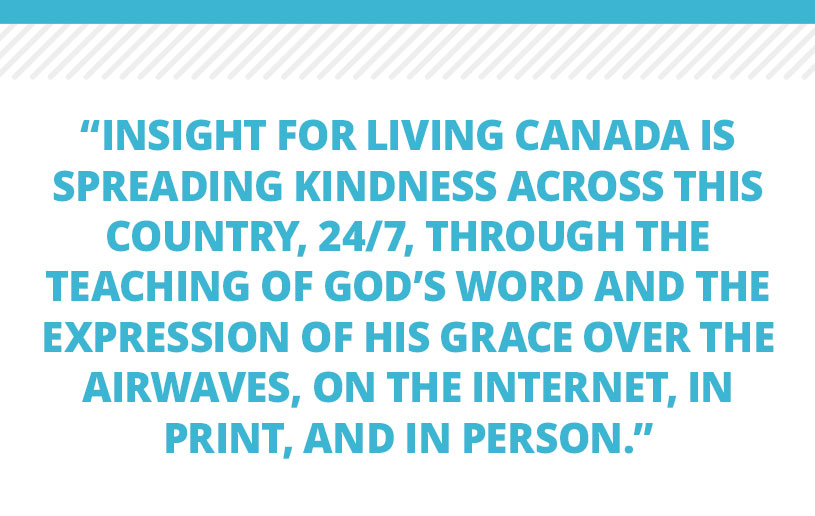 A number of years ago, I enjoyed a friendship with the president of a Christian university from a different part of the country. He has since gone home to be with the Lord, but my meaningful memories with him and stories from others still linger, bringing fresh feelings of joy to this day.

One especially touching story remains a favourite of mine. It took place at a time when the student body had reached record enrollment. The campus throbbed with excitement and activity, including a winning basketball team headed for a rare championship season. Even the chapel services were thrilling, as students filled the room, anticipating great times of worship.

But one student wasn’t caught up in the excitement. In fact, as her dorm emptied to attend chapel one morning, she stayed behind, fighting back tears. She quickly packed her luggage, planning to leave before chapel ended. Just as she finished loading her car, a friend spotted her and asked if she was OK. She could only squeeze out six words before sobbing and driving away: “I have to leave...I’m pregnant!”

Later, her friend, who knew the school’s president, told him of that very emotional encounter. His heart went out to the young lady. Several attempts to reach her proved futile. Weeks turned into months—months of silence and sadness as he and his wife prayed with deep concern, wondering how she was doing and where she might be.

As the next school year began, the president was disappointed to learn she had not returned. He checked her records again and found a phone number he’d previously overlooked. He dialed it...a thin, quiet voice answered.... He spoke her name. She hesitated, then said, “Yes?” He identified himself, and she began to cry. He could hear in her cry a mixture of embarrassment, guilt, and shame. He spoke with gentle kindness, assuring her of his and his wife’s concern and love. She was shocked to think he remembered her, and his tender tone along with his kind words brought her hope and reassurance, feelings she had not known for many long, dark months.

He learned that she had released her baby for adoption and was living alone without the support of her parents. In a later conversation, he and his wife invited her to live with them, which she accepted...and through their love, she rediscovered her God-given dignity and found a beautiful life of purpose and significance. She reenrolled in school and ultimately graduated with honours.

During my last visit to the president’s office, I turned to walk into the hallway leading to his door. I’d been there before, but this time I noticed something new at the entrance of the hallway.

I paused to admire it—a lovely, framed, handmade, colourful cross-stitch hanging on the wall. My friend then shared that the young lady had given it to him at her graduation, when he handed her the diploma she had earned. Her gift to this great-hearted president was her heartfelt thank you—three words that would find their place at the entrance of his hallway, announcing to everyone what they could expect when spending time with this fine man:

My friend lived out a passage from Ephesians I’m convinced we need to be practicing more than ever:

Get rid of all bitterness, rage, anger, harsh words,
and slander, as well as all types of evil behavior.
Instead, be kind to each other,
tenderhearted, forgiving one another,
just as God through Christ has forgiven you.
(Ephesians 4:31–32)

Aren’t you tired of hearing bad news? Of seeing evil on display? Of witnessing people—including believers—attacking each other with bitter, rage-filled, angry, harsh, and slanderous words?

I have a two-part challenge for you. First, commit to making YOUR home a place where kindness is spoken. Put Ephesians 4:31–32 on a card and place it on your dining table. Read it as a family before you give thanks for meals. Before you speak or write anything, ask yourself: Am I being kind, tenderhearted, and forgiving? Make this your family habit for at least a month. Second, commit to spreading kindness throughout your neighbourhood...and ask the Lord how you can do the same on a larger scale, beyond your physical reach.

Insight for Living Canada is spreading kindness across this country, 24/7, through the teaching of God’s Word and the expression of His grace over the airwaves, on the Internet, in print, and in person. Our strong commitment remains firm: spreading kindness to ALL!

Will you join us on this mission? Send your generous gift today or, better yet, sign up as a Monthly Partner.

Together, we can make God’s people a people of whom others can say: Kindness Spoken Here.

Subscribe to our monthly ministry letter
Date:
September 1, 2020
Type:
Back to Top