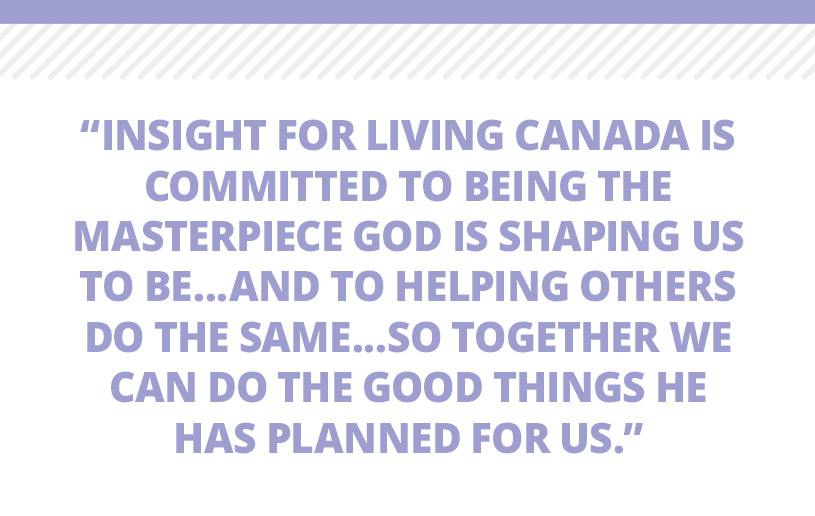 “Keep your eye on the Lord. Nothing happens behind His back. He’s totally in control.”

Charlie Costa, the pastor of IFL Arabic, gave that word to other Insight for Living Ministries staff in January 2020. “It’s such a comforting thought that God protects and guides His children,” Charlie continued. He then shared how protests in Beirut, Lebanon, where he serves, were growing more dangerous. The government had limited citizens’ access to their own money. People didn’t have enough to eat or pay their bills.

After one particularly hard day, Charlie went to bed in a quandary. “I went to sleep praying,” he said. “The next morning, I woke up singing. Literally!”

The Lord put the hymn “He Leadeth Me” on Charlie’s lips. “I couldn’t stop singing!” Charlie said with an astounded laugh. “The cares on my shoulders disappeared. I could see God’s hand leading me...”

For many years, the church Charlie pastors, Ras Beirut Baptist Church, also housed our IFL Arabic office, the living quarters for a missionary couple, and a shelter Charlie’s wife started for girls rescued from abuse. The nine-story, downtown building was a fantastic provision! But downtown is expensive, so many of our staff had to live outside the city. Their long commutes grew longer as political protests increased and, eventually, shut down sections of Beirut.

The downtown building was still perfect for Ras Beirut Baptist Church, as many members lived downtown. The shelter had relocated the year before. But IFL Arabic needed a new location outside the city. When Charlie talked with us in January, he had purchased a building in the perfect spot and needed funds to have it restored. The Lord impressed on him an opening date: August 3, 2020. Bit by bit, funds came in, workers completed the restoration, and our IFL Arabic office relocated outside the city right on schedule: August 3.

Watching the news, I thought of Charlie’s waking up singing, “He leadeth me: O blessed thought! O words with heavenly comfort fraught! Whate’er I do, where’er I be, still ‘tis God’s hand that leadeth me.”

The blasts wreaked devastation upon devastation. Hospitals already strained by COVID-19 overflowed—more than 170 lives were lost, dozens are missing, 6,000 were injured, and as many as 300,000 are homeless. People are still desperate to repair windows, replace furniture, and put food on the table. Neck deep in the medical recovery efforts, Charlie’s daughter, a cardiologist, described Beirut’s mood: “Rage, anger, despair, utter sadness. Then you look around and see people helping, cleaning, giving selflessly...so there’s a flicker of hope.”

How grateful Cynthia and I are for Charlie’s resting in God’s leading and obeying His promptings! By His own hand, God led our team out of harm’s way. They and their families are safe. However, Ras Beirut Baptist sustained $5,000 in damages, impacting not only the church but also our missionary friends.

Let me be clear that I’m NOT suggesting God caused the blast or intervened for our team because they are worthier than others. What I do believe is that the Lord sheltered them, just as He saved them for eternity—by His grace. I also believe they—like you—are God’s masterpiece. Read the following verses slowly and carefully:

God saved you by his grace when you believed.
And you can’t take credit for this; it is a gift from God.
Salvation is not a reward for the good things we have done,
so none of us can boast about it.
For we are God’s masterpiece.
He has created us anew in Christ Jesus
so we can do the good things he planned for us long ago.
(Ephesians 2:8–10)

Have you considered that marvellous truth? In Christ, you’re created anew! You are a canvas and God is the Artist, using His brush to reframe you into a stunning masterpiece, free from sin’s control and uniquely equipped by Him. Why? So you can do the good things He planned for you long ago!

Insight for Living Canada is committed to being the masterpiece God is shaping us to be...and to helping others do the same...so together we can do the good things He has planned for us.

One of those “good things” is making disciples across Canada!

Is reaching Canadians with the life-changing truth of God’s Word one of the “good things” God has planned for you?

Ask Him! If His answer is YES, then send your gift today to Insight for Living Canada. Your support will help keep our operations fuelled and effective across our nation.

As God prompts you, please send your donation with faith, knowing it’s “by His own hand that He leadeth you.”

PS The money you donate to Insight for Living Canada stays in Canada. If you would like to support IFL Arabic with your finances, please visit vision195.com.

Subscribe to our monthly ministry letter
Date:
October 1, 2020
Type:
Back to Top