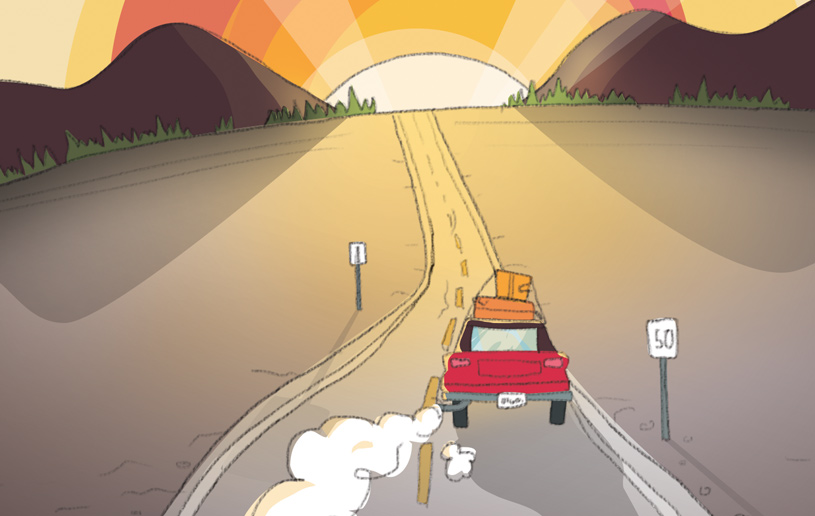 Late on a Tuesday in August the text message came. “Mom had an aneurism. She's in a coma. Not expected to live 24 hours.” We were on a remote island and even a float plane wouldn't get us back in time.

So we cried and prayed and called the kids then lay in bed, the memories swirling.

In my first memory of my mother–in–law she's an hour from home in her housecoat and slippers. I would come to know her as one of the best–dressed gals I've met, but not that night. It was 1976 and I'd started dating her gorgeous daughter Ramona. Our dates mostly consisted of riding bikes, then sharing a can of Coke. My Scottish ancestors would have wept for joy at my frugality.

One week later I splurged, driving Ramona to a nearby city. We bowled, then dined at a posh A&W drive–in, where the maître d' clipped a tray to my 1916 Ford Maverick window. On it sat a Papa Burger, fries, a large root beer, and a baby orange—something I didn't know existed until Ramona ordered one. She later admitted to being too nervous to eat, though she managed to polish off half my meal, something she still does to this day.

To walk off the fries, we strolled through a flowered park and when darkness landed discovered I had locked the keys inside the impenetrable doors of my ancient car. Ramona called her mother collect, and an hour later she arrived, somehow managing to look classy in a housecoat. “Here you are,” she snickered, jangling a backup set of keys. “Uh, I'm thank you…I mean, sorry,” I managed. The snicker was still there as she drove away.

We sat on the hood of my car looking at stars and finally I asked the question I'd pondered for weeks. “Where is your dad?”

“He drowned when I was eight. The river flooded our farm and…I watched him—” her voice trailed away.

But she wasn't fine. Floods and memories make jeopardous allies.

After the tragedy her mother moved seven kids a thousand miles to be near her parents, then took a job in a cannery at five bucks an hour to support them. “God led. I followed,” was all she said about it. She had only a grade eight education and a mother who never really wanted her around, yet she was intelligent, courageous, and unflappable. Gathering on the horizon was a storm called Huntington's and in time she would learn three of her beloved children carried the deadly gene. “I never heard her complain,” said Ramona. “God gave her enough light for the next step. I don't think we'd have made it without our church.”

Five years after the housecoat episode, I asked to marry her daughter. Mom didn't say much. A nod of her head. More chuckling. When our children arrived, she babysat with efficiency and resourcefulness. After one weekend, she handed our daughter to us and said, “Here. She's potty trained.” And she was. Still is.

When the phone call came exactly 24 hours after the text message, I mourned her passing as I did my own mother's. She had taken a road trip with her daughter Caroline, visiting old friends and family, swimming in Lake Okanagan, buying an outfit, eating ice cream. “I've got a headache,” was her last complete sentence. She never wanted to be a burden or overstay a welcome. God in his mercy took her quickly, surrounded by family singing “Amazing Grace.”

Her seven children loved God and rewarded her with 20 grandkids and 30 great-grandbabies, a small combat unit we attempted to feed after the funeral. The thing about burying a Christian mother is that, amid all the tears, you find yourself mimicking her grin. She buried a husband, a son, and plenty of dreams, but never the hope of heaven that propelled her forward. Hope gave birth to thanksgiving and thanksgiving to contagious joy.

I think it important to disclose that my wife's relationship with her mom fell far short of perfect. Yet things softened in recent months. Two weeks ago I was privy to their final conversation. “I love you,” were the last words Ramona said to her mother.

We would all do well to say things while we can. Things like, “I'm proud of you. I'm sorry. I should have had three more just like you.” Regret for words left unsaid is almost inconsolable.

And I would do well to pass this article by my wife for her verdict. She's in the kitchen now and—wouldn't you know it—she's wearing slippers and a housecoat.

Subscribe to our monthly magazine
Date:
March 21, 2013
Type:
Topic:
Back to Top