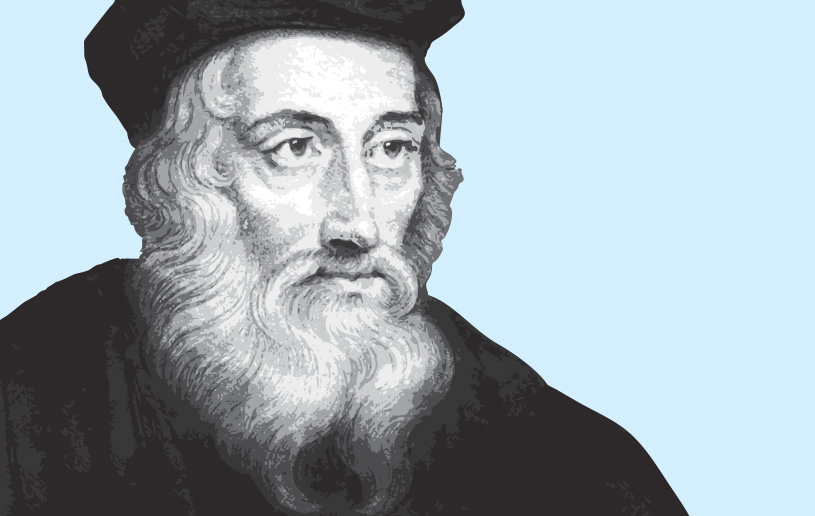 This month’s hero of faith who encourages me as we walk through this tumultuous season is English theologian, Bible translator, and reformer, John Wycliffe.

John Wycliffe was born near Richmond in the North Riding of Yorkshire, England sometime in the late 1320s. He went to study at Oxford University around 1345 and by 1360 was chosen to be Master of Balliol College. Soon after arriving at Oxford, the Black Death began to ravage England and it is estimated to have wiped out between 30 to 40 per cent of the population. This had a profound effect on Wycliffe’s life and the society in which he lived.

Wycliffe enjoyed the life of an academic and was recognized as one of the foremost philosophers and theologians in England and throughout Western Europe. As he studied the Scriptures, he recognized the corruption within the Catholic Church and called for church reform. He rejected the practice of indulgences and said of salvation, “Trust wholly in Christ; rely altogether on his sufferings; beware of seeking to be justified in any other way than by his righteousness.” Wycliffe held similar views regarding salvation to those of Martin Luther nearly 150 years later. Thus, he is known as the “Morning Star to the Reformation.”

Most notably, Wycliffe wanted the people of England to hear and read the Bible for themselves in English. He oversaw the translation of the New Testament from the Latin Vulgate into Middle English. He argued that the Bible has a higher authority than the Catholic Church’s teachings and is the only reliable source of God’s truth declaring, “Holy Scripture is the highest authority for every believer, the standard of faith and the foundation for reform in religious, political and social life … in itself, it is perfectly sufficient for salvation, without the addition of customs or traditions.”1 In his translation to English, Wycliffe went back to the original text leaving out all the interpretative notes that had been added through the years by the Catholic Church. This was a radical undertaking as it went against the mandate of the Papacy to not translate Scripture into a vulgar tongue, punishable by death.

Wycliffe completed his translation of the New Testament into Middle English shortly before his death in 1384. His friends continued his work and published the entire Bible in English a few years later. The call for reformation by Wycliffe continued through his followers, known as Lollards, who began preaching his ideas, bringing an awakening to England even though it was against the law. Though Wycliffe died in peace, many of his followers were burned at the stake. In 1428, to send a message across Europe to those who defy the Catholic Church, the Pope ordered Wycliffe’s bones to be dug up, burned, and thrown into the River Swift.

John Wycliffe is often called the great-grandfather of the Reformation, who planted the seeds for the work of John Huss and Martin Luther. He was a brave man during a tumultuous time and obeyed God’s call, speaking the truth regardless of the outcome.

“In him was life, and the life was the light of men. The light shines in the darkness, and the darkness has not overcome it.” (John 1:4–5 ESV)