How to Handle Straying Saints 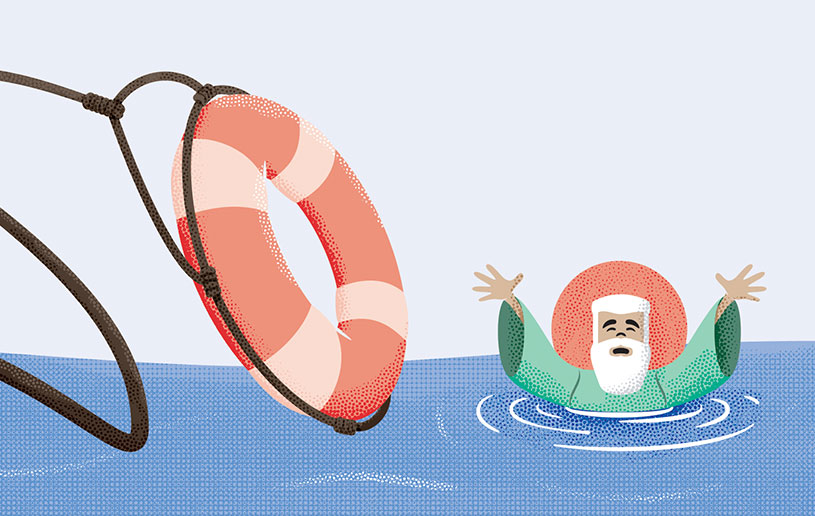 Have you ever rescued someone from drowning? If so, you know how victims often fight their rescuers in the hysteria of that terrifying moment. The same is often true when an attempt is made to rescue those who are floundering spiritually because their faith has suffered shipwreck.

Author and teacher Howard Hendricks tell the story of a young man who strayed from the Lord but was finally brought back by the help of a friend who really loved him. When there was full repentance and restoration, Dr. Hendricks asked this Christian how it felt while he was out at sea, in deep water, deep trouble, and all his friends were on the shoreline hurling biblical accusations at him about justice, penalty, and wrong-doing. He answered:

In James 4:11–12, James does not prohibit Christians from confronting those who have strayed; rather, he warns against believers who maliciously slander others. Jesus underscored this same point in Matthew 7:1–4. The conclusion many Christians have drawn from these two passages can be boiled down to just three words: Do not judge!

But what about those times when a Christian brother or sister strays from the Lord? Shouldn’t we attempt to rescue those whose faith has suffered shipwreck? Or do we simply let them perish? The climax of Jesus’ words in our Matthew passage answers this seeming dilemma. According to Jesus, there is a place for taking specks out of other Christians’ eyes (7:5). But remember, there are few places in our bodies more sensitive to touch than the eye. And just as removing something from the physical eye requires extreme sensitivity, so does attempting to remove the spiritual speck from our brother’s or sister’s eye. Jesus is not condoning those who feel “called” to criticism. Rather, He is welcoming the help of those who are willing to have their own spiritual eyes cleared before rescuing others.

To learn more about the techniques involved in spiritual eye surgery, let’s turn now to James’ words in 5:19–20. Four important questions arise from his pen.

First, about whom is the counsel addressed? At a glance, it appears as though James is speaking about saving lost souls from hell. However, the words “my brethren” and “among you” indicate that he is addressing believers.

Second, what has occurred that would cause James to write these words? Most likely, someone has strayed from the truth. The word “strays” in Greek is planao, from which we get the word planet. The heavenly bodies seemed to the ancient Greeks to wander in the sky. Likewise, when Christians stray from the truth, they wander from the prescribed course they once knew.2

Third, from what has the person strayed? The truth. Commentator Spiro Zodhiates expands on what straying from the truth involves.

The truth of which James speaks is naturally the person and work of Jesus Christ. He does not refer to an abstract philosophical or theological system, but to Christ Himself, who said, “I am the way, the truth, and the life” (John 14:6).... Of course, the word “truth” here also means all that Christ taught and instituted. It is His whole doctrinal and practical teaching—not the teaching of any particular church or denomination, but of Christ. And where is this teaching to be found? In the Word of God, in the Bible.3

Fourth, what should be done? Now we come to the most sensitive part: removing the speck from our brother’s eye. When Christians wilfully stray from the truth, James says that one must turn them back, meaning any Christian with a clear eye—not just church leaders—must help turn around those who stray. Don’t ignore them or hurl criticisms from a distance, as some did to that young Christian Dr. Hendricks mentioned. Swim out after them and don’t let them go!

Now that we’ve considered the action we must take, let’s turn to Galatians 6:1 for a close look at the proper attitude we need. To qualify for helping restore others to the truth, we must first be filled with the Spirit and not controlled by the flesh. We must seek the Spirit’s help in removing the logs in our own eyes before we attempt to remove them from others. Only those who are spiritual—who approach such an operation in complete dependence upon the Spirit—need apply for the job.

The second qualification Paul mentions is gentleness. Carnal Christians are usually extremely sensitive to criticism. To approach them with a harsh, critical spirit only ensures failure and rejection. But a gentle spirit encourages those who are floundering to relax and be reconciled to God.

Third, before we rush off into deep water to rescue someone, we should check to be sure we are equipped with an attitude of humility—“looking to yourself, so that you too will not be tempted” (NASB). Misjudging the depth of the problem or overestimating our ability to handle it could quickly leave us floundering as well.

Removing specks is not a pleasurable task. There’s no delight in rescuing someone who is thrashing and kicking against your every effort to help. In fact, those who are truly humble are often reluctant to step in, knowing that they don’t have the power in themselves to pull the other person to safety. Nevertheless, the humble do wade out, slowly...prayerfully, because of a genuine love from the Father.

Thus far we’ve covered the action and attitude involved in handling saints who stray. Now let’s go back to James 5:20 and see what happens when they are restored.

The first result is that the straying saint’s soul will be saved “from death.” The word death could mean that if this individual had not turned back to the Lord, he or she may have died under divine discipline. It is more likely, however, that James means death in a broad, metaphorical sense. When we turn straying saints back to the Lord, we rescue their souls from a deathlike existence of loneliness, bitterness, anguish, and guilt.

The second result is that we “cover a multitude of sins.” When someone is brought back into the fold through confession and repentance, Christ’s forgiveness completely covers this formerly lost sheep.

Throughout his letter, James has pinpointed specific areas in which Christians have begun to slip: doubting during trials, blaming when tempted, anger and prejudice, sterile intellectualism, a loose tongue, jealousy, arrogance, being judgmental, planning without God, taking advantage of others because of wealth, and lack of prayer—to name a few. For these five chapters, James has been coming to our rescue. Now let’s close by crystallizing his counsel about our rescuing one another.

First, there are definite occasions when we are to be involved in removing specks from others’ eyes. Second, the entire process must be under the direction of the Holy Spirit. Third, the motive or attitude is as important as the action. And fourth, when we are prompted by the Lord, we should not feel reluctant or out of place about confronting others. Remember that you are saving that person from death and covering a multitude of sins. Don’t let go!

1. As noted by Charles R. Swindoll, in a sermon titled “Set Me Free,” given at the First Evangelical Free Church of Fullerton, California, January 25, 1981

2. The implication here is that James is talking to believers, because only those who have intimately known the truth can stray from it. Unbelievers cannot stray from something they have never known.