Grace Upon Grace: Insight for Living Ministries in the Arabic Language 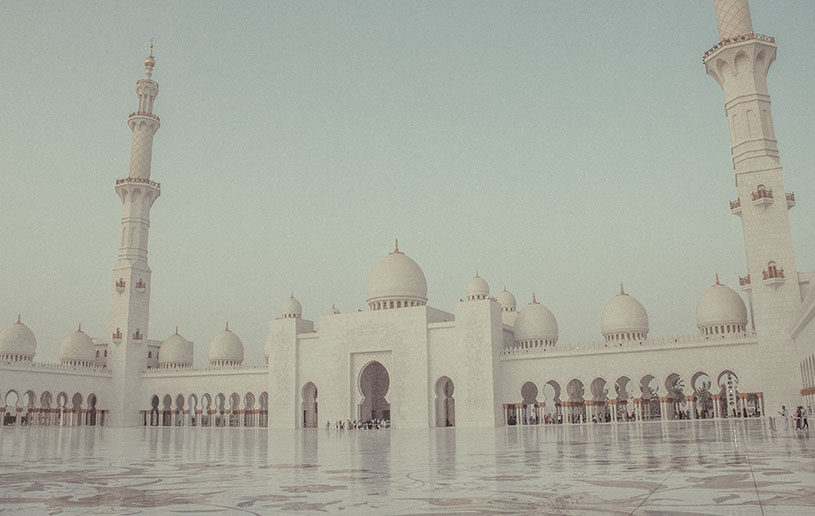 A 17-year-old woman who grew up in a Muslim home sought for life’s answers when she stepped into a Baptist church in downtown Beirut, Lebanon. One truth is all she needed to hear during her visit:

Suddenly, a burden lifted from her shoulders followed by a deep sigh of relief. After hearing that message of grace for the very first time, she looked at her friend and said, “I want to keep coming here.”

The person who shared that truth with her is Insight for Living Ministries’ (IFLM) Arabic pastor, Charlie Costa, who spearheads IFLM’s Vision 195 efforts in the Arabic language. Charlie shares that he frequently receives that kind of response when he offers the word of grace to Arabic-speakers because it’s often the first time they have ever heard such a message.

For nearly 25 years, Charlie has been the “voice” of Pastor Chuck Swindoll in the Arabic language, offering the grace of Christ to anyone who will receive it. And despite threats of persecution, national calamities, or geopolitical unrest, he and the IFLM Arabic team will continue doing so according to the strength supplied by the grace of Christ.

Grace from the Start

“I remember my dad playing cassette tapes of Chuck’s sermons,” recalls Charlie. His faith was nurtured from a young age. Charlie’s dad pastored in Lebanon and was greatly esteemed by many because of the depth of his spiritual character and his mastery of the Arabic language. His dad even translated beloved English hymns into Arabic—some of which are still sung to this day!

Charlie never imagined he would work with Pastor Chuck Swindoll, but God arranged an appointment between the two of them in the mid-1990s in Fullerton, California. Pastor Chuck recounts:

Cynthia and I would often say it was a love relationship from the start. I always loved Charlie’s passion and excitement about life. I had to pull from him stories about the danger factor and challenges he lived with because he didn’t like to flaunt them. He was not afraid. He reminded me of Daniel in the Bible because he pressed on through times of enormous threat!

Charlie joined IFLM in 1997 to translate Pastor Chuck’s sermons into Arabic and to serve as the IFLM field pastor for Arabic-speakers. The first broadcast sermon soared across the airwaves via Trans World Radio from a once-vacant radio station in Monaco built by Hitler in WWII. Early on, Charlie commuted between Lebanon and Monaco to record the broadcasts. Then, on April 3, 1999, the broadcast began airing from the Mediterranean island of Cyprus under the name Nafitha Ala l’Hayat, which means “Window to Life.” For more than two decades, the profound message of God’s grace has captivated Arabic-speakers and has even led to the sprouting of new churches throughout the Middle East.

There are more than 420 million Arabic-speaking people around the world, and many of them follow the religion of Islam, or they at least live in an Islamic-centered culture. To those who receive the Gospel, the message of God’s grace through Christ refreshes like cool water on a hot day because of the freedom it offers to those in such a strict environment. Charlie explains his ministry approach within Islamic culture:

Islam isn’t a flexible religion. Culture equals Islam. Islam equals identity. To ask Muslims to abandon their faith in Islam is to ask them to turn their backs on themselves, their families, and their friends, and to become something foreign. To help followers of Islam become followers of Christ, I don’t stress Christianity the religion but Christ the person, who wants to have a relationship with them.

IFLM’s Arabic sermons and resources are available in approximately 22 countries where Arabic is the official language. Such countries include Lebanon, Jordan, Syria, Iraq, Yemen, Saudi Arabia, Egypt, and Sudan, while listeners range from Christians to Muslims and seekers alike. Many of these listeners contact the ministry with follow-up questions via IFLM Arabic’s mobile app, social media, mail, or at arabicinsight.com.

Many Muslims who turn to Christ risk alienation, persecution, and even martyrdom because many Islamic-centered cultures see Christianity as a hostile threat.

For example, in 2004, Islamic extremists in Baghdad aimed to kill Charlie and other ministry partners because they were planting churches in Iraq. So Charlie had to reduce his missionary endeavours there. More recently, Joe Costa, Charlie’s son, and his team were attacked and harassed in downtown Beirut when they were doing what they call “Discussion Tent Ministry.” Because of Lebanon’s unfathomable economic and political hardships, which we’ll discuss more, Joe’s team regularly sets up a tent on a bustling street in Beirut where people can talk through what’s happening in their lives and then receive a guiding and comforting word from Scripture. When supporters of Hezbollah, a powerful political and militant Islamic organization operating in Lebanon, passed by the tent one day, they shouted at them and threw rocks and glass bottles. But as soon as the hostilities ceased, Joe’s team immediately offered them a word of grace, coming out from their shelter and saying, “We love you. We invite you to come sit with us to talk.”

Conflicts and hostilities not only arise against Christians by the surrounding culture, but they also occur between the various Muslim cultures and between the nations. Grace, hope, and faith are vital for survival and peace. So, Charlie and his team strive to stay grounded in Christ and His mission. He says:

The dynamics in the Middle East are extremely difficult. These conflicts have roots that go back to biblical times. The fire is still burning. The flip side is that Jesus says, “My peace I give to you” (John 14:27). With all the negativity, there is a positive side: an opportunity to share the gospel. The offer of peace is attractive. On the radio program, we don’t talk about politics or the economy. We talk about how we all need Christ. He is our only source of peace in such a tumultuous time.

Currently, IFLM Arabic is shining the beacon of God’s grace through the darkness of Lebanon’s national calamities. This remarkable country, where ancient and modern worlds meet, has gone through unimaginable hardships during the past few years including government collapse, economic depression, extreme social unrest and division, colossal inflation, food and medical shortages, weakened infrastructure, and the massive influx of more than 1.5 million Syrian and Palestinian refugees (about 20 percent of the population) into a country smaller than the state of Connecticut. But Jesus has given grace to IFLM Arabic in such hardships so they can continue offering the message of God’s grace.

Charlie, his team, and other ministry partners have provided vital necessities like food, clothing, diapers, and medicine to those in need. Once, they even facilitated medical checkups for more than a thousand refugees! Ministry leaders have had unprecedented opportunities to share the Gospel by holding children’s camps, leading Bible studies, and providing biblical counseling.

I appreciate and admire IFLM Arabic’s deep commitment to Christ. The team has endured such difficulties that would keep many Christians from serving in ministry. But Charlie and his team continue working and ministering—and they do it with joy!

Despite such hardships right at his doorstep, Charlie continues to cling to hope and proclaim the message of grace. One of his favorite Bible verses is Isaiah 3:10:

Tell the godly that all will be well for them. They will enjoy the rich reward they have earned!

Grace All the Way Through

Today, the IFLM Arabic team, which includes six full-time and three part-time staff members, remains just as focused and hopeful as ever. Hundreds of Pastor Chuck’s sermons have been translated into Arabic, including series such as David, Abraham, Esther, Marriage, Biblical Parenting, and, of course, Grace Awakening. Plus, 10 of Pastor Chuck’s books are available in Arabic along with two more in digital format.

Charlie takes a holistic approach to media ministry. He says:

It’s our plan and policy and desire to use every possible tool we can lay our hands on to share the messages released through Insight for Living Ministries. You must understand the messages we’re sharing distinguish themselves in the style of their preaching. The content is so rich and valuable. There’s a lot of teaching and then a lot of application. People listen to the broadcast because they don’t want just to feed their minds and their heads. They want to feed their hearts and their lives! And this is what makes IFLM Arabic special. It’s a practical ministry. People can take those lessons and go out and try to live them and see God help them through the Holy Spirit. So we use the internet. We use phone apps like WhatsApp. We have people who subscribe to get those sermons. These sermons are not out there through WhatsApp for immediate and instant access. People must ask for access to them. And they are asking. People want to study the Word. The feedback is amazing!

The IFLM Arabic ministry team—in partnership with Stonebriar Community Church, pastored by Chuck—also continues to work toward meeting crucial needs such as ongoing food-distribution efforts throughout Lebanon. Charlie will soon wrap up the Arabic translation of IFLM’s Searching the Scriptures pastor training curriculum and is working on ways to expand the ministry’s radio presence. Arabic-speaking pastors especially appreciate and rely on this ministry. For example, pastor M. from Syria, wrote to the IFLM Arabic office:

I follow these series daily. Please pray for us. The preaching is a great blessing to us. Please send some publications.... I am very grateful to God’s faithful servants.

IFLM Arabic is grateful for the prayers and support of IFLM ministry partners. In closing, here’s a prayer request from Charlie and his team:

Pray for Vision 195. It is an extremely challenging vision to send the Word out. Pray for the team in the Middle East as they work diligently to put together the Arabic broadcast of Insight for Living. One last request is to pray for our safety as we travel. We need prayer, not only for our own safety but for the safety of those who come to Christ under adverse conditions—that they would experience the presence of Christ in their lives. And if worse comes to worst and they are called upon to pay the ultimate price, that they would have grace.

Therefore let us draw near with confidence to the throne of grace, so that we may receive mercy and find grace to help in time of need. (Hebrews 4:16)

Subscribe to our monthly magazine
Date:
December 16, 2022
Type:
Back to Top