Five Phrases You Should Never Say to Your Wife 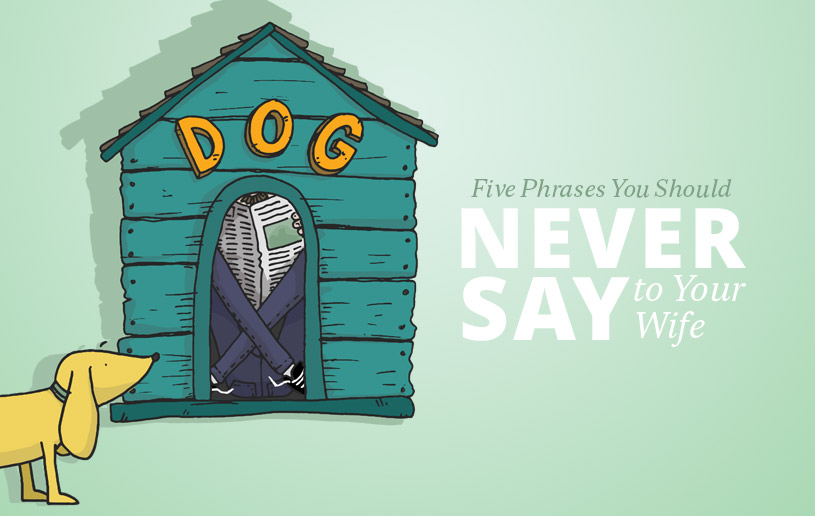 I’ve been married more than 30 years in a row partly because I have learned the hard way that there are 777 things you should never say to your wife.

Thankfully I’ve learned some things you should say too, but first here are just five phrases we need to put to rest for good.

1. “Julie’s baby sleeps right through the night.” When our kids were babies and my wife had done without a proper sleep for four years, I once said this to her. Trust me, husbands of young mothers, if you know someone who has a child that sleeps like Rip Van Winkle then wakes up giggling, keep it to yourself. You may find yourself sharing accommodations with the dog.

3. “Why don’t I buy you an exercise machine?” I once heard about a guy whose wife told him she wanted something that would go zero to 60 in less than six seconds. So he bought her weigh scales. I do believe they buried him on a Wednesday. An offer to purchase can be tendered on a house, but never on an exercise bike, spandex, or fitness passes. Which takes us to number four.

4. “I think you should choose the salad.” I know it’s crazy but some women have been known to get really sensitive about their weight. Wise men stop commenting on menu decisions in restaurants. When she orders sweet potato fries, ask to sample a few, but one criticism should only be spoken after one hundred compliments. And remember that a new study has shown that women who are just a bit overweight live longer. Than the men who point it out to them.

5. “What did you do all day?” Women work harder than men. No one has done a study on this because no one has ever questioned it. And lived. My wife’s work ends about 11 p.m. each and every day. She is an adviser, a chef, a chauffeur, a concierge, a doctor, a nurse, an accountant, an economist, an interior designer, a social planner, and a great lover of God and me.

And what have I learned to say? Here is small sampling.

We will celebrate 33 years of marriage this August because we’ve learned to laugh about some of these things, but far more importantly because we’ve learned to celebrate God’s grace every day. We’ve found that daily encouragement brings healing and life. That repentance and forgiveness keep a marriage strong. That faith in Christ provides the foundation and praying together the glue. That commitment is simply doing the thing we said we would long after the fuzzy feeling we had when we said it is gone.

The writer of Proverbs 31 asked, “Who can find a virtuous and capable wife? She is more precious than rubies.” Amen. And so tonight I plan to thank her by saying, “Let’s go buy you some shoes.”