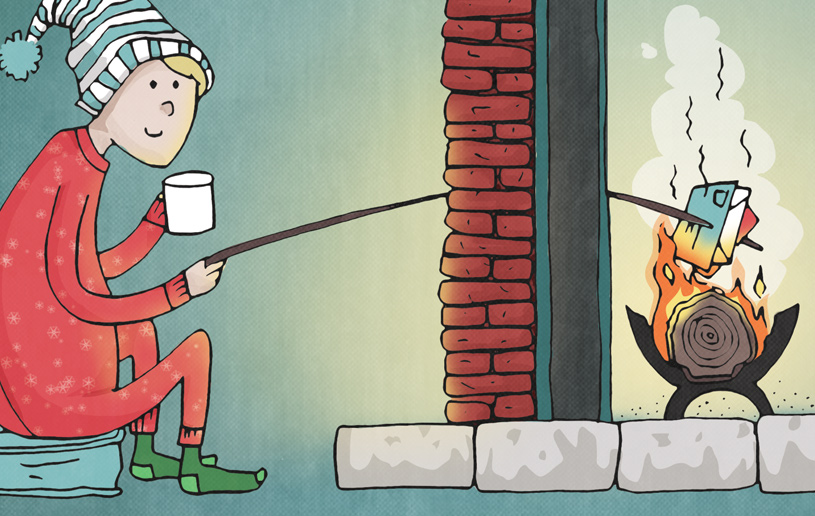 Although it has been a family tradition since my Scottish ancestors stowed away on the Mayflower, I have decided to avoid the writing of a Christmas letter this year. My reasons are threefold. Firstly, I am a procrastinator. My favourite T-shirt has this emblazoned on the front:

Secondly, the price of postage is getting out of hand for a Scot, leaving email as my only option. Since I receive approximately 1,400 junk emails a day mostly from folks who should have their mouths washed out with soap, I have decided to refrain.

My third reason for avoiding the traditional Yuletide epistle is that each year I receive lengthy letters from friends of mine who have had the perfect year. Here’s one that arrived while I was having a perfectly good day last December. Names have been changed to protect the guilty.

It’s been such a great year! Little Joseph (age 10) continues to excel in his studies in eleventh grade. It was slow going that first day in biophysics but he’s pulled up his socks enough to be grading papers for his favourite teacher. Joy (8) was voted Female Athlete of the Year in three separate sports (basketball, tennis, and skeet-shooting) and won both the fly-fishing derby and the pie Bake-Off for the second year running. Jonathan (6) is on the honour roll again, but has struggled a little with Spanish because he finds it similar to Portuguese, which he mastered last year. He enjoys leading the discipleship group and volunteering at the Seniors Centre. After my promotion, we decided to spend a month in the Caribbean where we adopted the twins (Juanita and Jose). My lovely wife June is tireless. She home-schools the kids, serves as a midwife (58 births this year) and has written her second dieting book. My job at the bank is certainly challenging, but difficulty squeezes the best from us all, doesn’t it?

If I were to postpone my procrastinating long enough to write a Christmas letter this year, it wouldn’t look anything like Jerry’s. In fact, it might arrive looking something like this:

Warm Greetings from the Callaways,

I was hoping to tell you of our wonderful year. Then January arrived. In hindsight, the New Year’s Day explosion (a simple mix-up involving household chemicals like paint and bleach) should have foreshadowed things to come. On Valentine’s Day the basement sewer backed up. Apparently Jeffrey had spent years wondering what would happen if he flushed a beach towel. March saw one of us total the fender on the Ford three days before the engine light came on for good. May began with word of the tax audit (I accidentally added an extra zero to a cheque we wrote to our church), and in June the flooding began. July saw our daughter Rachael and her husband take off for Germany. It’s been quite a year. On a much sadder note, we’ve said goodbye to my closest friend Lauren and three members of my wife’s family. Her mother, her stepdad, and an older sister who battled Huntington’s disease for 25 years.

I suppose a Christmas epistle from the Callaways would hardly be welcome reading while roasting chestnuts on an open fire. If joy depended on our circumstances, we’d have had an awful year. But we haven’t.

Jeffrey left the front door open while we were decorating the Christmas tree—trying to heat the great outdoors, I suppose—and I yelled, “Were you born in a barn?” He poked his head around the corner and laughed. “Jesus was,” he said. And he was right. God sent His Son into the world for families like ours, families where the unexpected and the tragic infiltrate daily living, where questions don’t find ready answers and parenting is exhilarating and exasperating, all in the space of six seconds. He came to the messiest of places, invading our brokenness with hope.

This Christmas will mark the first time that we open presents without some very special people watching from a nearby sofa. I’ll miss some of the gifts my wife’s mother used to lavish on us. Chocolates. Gift certificates. And more recently a green-and-red Christmas sweater I haven’t had the nerve to wear publicly or the heart to throw away. But Christmas was never about stuff. It was about relationships. As we’ve reminded our children, “It’s not our birthday we’re celebrating now is it.”

So this year beneath the tree, we won’t find as much as we used to. But still I’m working on my Christmas list. I think I’ll wrap up some household cleaners for my wife. A little bleach. A little paint. And after I help Jeffrey pick out some new bath towels, I think I’ll wrap up a family heirloom for the boy. I’ve heard Christmas sweaters are all the rage these days.

Subscribe to our monthly magazine
Date:
November 14, 2013
Type:
Topic:
Back to Top