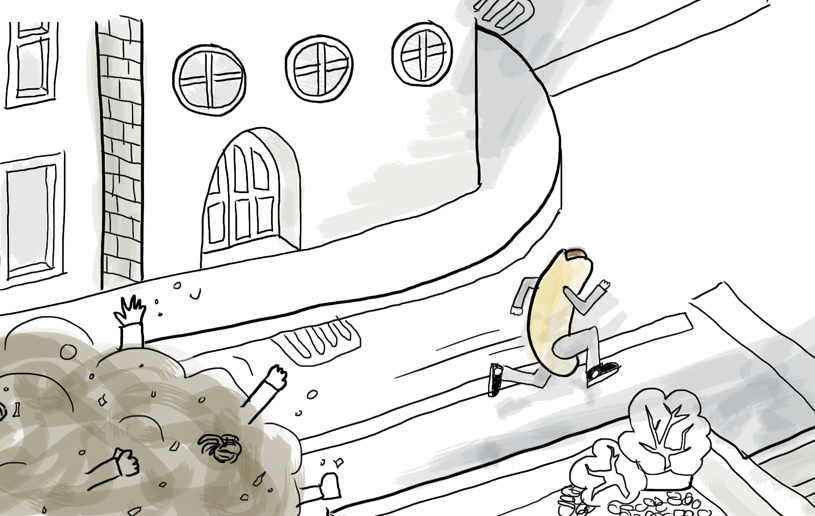 I know what you're thinking, “I don't even like boxing.” But Joey isn't a boxer. Joey loves to eat. At the world famous Nathan's Hot Dog Eating Contest held each summer on Coney Island, New York, he managed to inhale 54 hot dogs and buns in 10 minutes flat, using both hands.

The guys are not alone in this. Sonya Thomas ate 41 hot dogs before the buzzer sounded. Nicknamed “The Black Widow,” Sonya was ranked “the number one eater in America” for a time and weighs less than 100 pounds.

“I am always trying to stretch my stomach,” she explained in an interview. And what is the secret to her rigorous training? According to Sonya, she runs on the treadmill for close to two hours a day and manages a Burger King, where she gets a good workout being on her feet, overseeing the fast food operation. After work, she goes to all-you-can eat buffets whenever she can. Sonya also holds 27 other world eating titles. She has wolfed down eight pounds, two ounces of fries in 10 minutes, gulped 11 pounds of cheesecake in nine minutes, gobbled 65 hard-boiled eggs in six minutes 40 seconds, and chugged eight pounds of baked beans in two minutes 47 seconds. But the record of which she is most proud? Oyster consumption. She tossed back 432 of them in only 10 minutes. And was she full? “I could have eaten more,” she said. Take Sonya to lunch, but first re-mortgage your home.

What drives Sonya to train so hard? “Someday I'd like to be treated with the same respect and admiration as sports stars Tiger Woods or Michael Jordan.”

While reading her story, I couldn't help but think of 1 Corinthians 9:25, which says “Everyone who competes in the games exercises self-control in all things. They then do it to receive a perishable wreath, but we an imperishable” (NASB).

Some live to eat, and some live to play. Recently a 54-year-old man was pulled over on a freeway in Toronto. Why? For playing the violin while driving. He told the cops he was on his way to a performance and needed to warm up. He's lucky he didn't play the tuba.

Dave Moffitt is passionate about sports. So passionate that for six years he has been living, eating, and sleeping in his car, driving across America watching sporting events. He has seen every NFL, NHL, MLB, and NBA team play in its home stadium or arena. He has watched hundreds of horse races, car races, golf tournaments—even Little League games. Dave's passion doesn't cost him as much as you'd think. He eats veggies from a can and sneaks hot dog buns into stadiums where he loads them up with free relish, ketchup, and mustard. He shaves in Wal-Mart bathrooms and showers at truck stops. Dave has earned four master's degrees but retired after more that 30 years of teaching junior high P.E. He just loves sports.

Not surprisingly, Dave has an ex-wife and two estranged daughters. And if his new girlfriend tires of his passionate pursuit Dave says they won't be together anymore.

Someone has defined failure as succeeding at something that doesn't really matter. Are you passionate about things that last? I hope so.

And what am I passionate about? Living for Jesus. I've already planned my epitaph: “He found God's grace too amazing to keep to himself.” I'd like to spend whatever days I have left telling others of God's amazing love, reminding them of our reasons to rejoice, helping them bring joy to life.

And I'd like to eat a few hot dogs at baseball games this summer. I think I'll eat them one at a time.