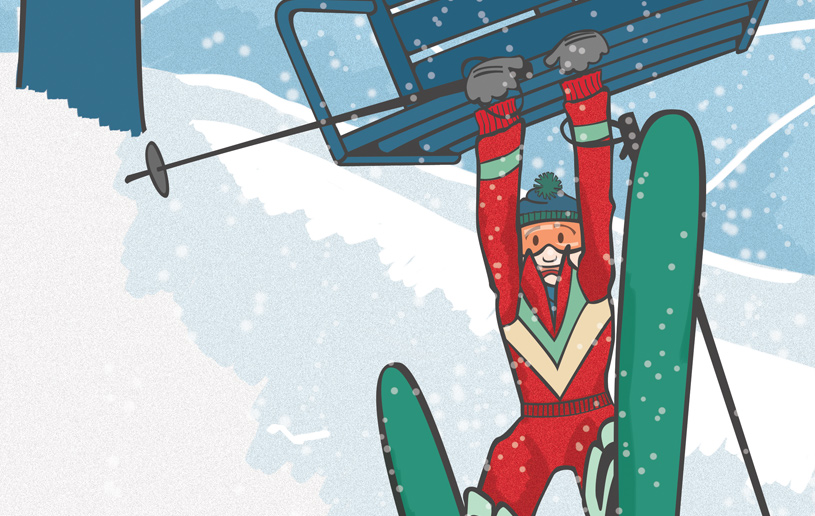 Christmases of my childhood were jam-packed with soft mint candies, shortbread cookies, and more romance than a Barry Manilow concert.

In third grade I held hands with a pretty girl from Georgia during two complete laps of our ice rink in frozen Alberta. I asked her to marry me during the second lap, so caught up in the joy of the season was I. Sadly she said no, believing that her boyfriend might murder the both of us if he found out.

I pretty much stayed indoors then until about tenth grade, when a curly-haired blonde arrived in town. She had no boyfriend that I could see, but she sure could skate. We took a twirl on that same ice rink and being the perfect gentleman I was, I offered to hold mittens with her just in case she fell.

“Woah, I'd love to try that sometime.” I was thinking of skiing too.

“You haven't skied? Ever? You should come along.”

I prayed about it for about .03 seconds and eagerly said, “YES!”

Now if you've ever been foolish enough to make your maiden ski voyage down one of Canada's Rocky Mountains at 30 below zero while trying to impress a girl so cute boys ski into trees watching her, you may kick yourself for years. Her name was Ramona and the girl sure could ski. As for me, I was a good faller.

Seven of us made the trip—me, and six potential in-laws. I fell about 32 times just trying to join the long line of eager skiers awaiting The Chair. Then I fell in line. Literally. Unable to locate the brakes, I lost control of my ski tips, causing a domino effect that almost activated the insurance policies of a dozen European tourists. A few threatened me in German, waving their ski poles and drawing mittens across their throats. No one was laughing. Except for Ramona. She pulled a scarf over her nose in a weak attempt to stifle it. Ah, the girl can ski. And laugh. I hoped.

My potential relatives-in-law climbed aboard The Chair three at a time, leaving me seated with two complete strangers who had not completely forgiven me for almost harpooning them with my ski pole. As we neared the apex of the mountain, I was terrified and frozen and I voiced what had been troubling me awhile: “How do you get off this thing?”

“Er ist ein Idiot!” one tourist said to the other.

“SKI TIPS UP,” shouted the sign. I put my ski tips up. The strangers disembarked. It looked easy enough. But by the time I had finished admiring their style, the ground was a dizzying distance below my skis. And the chair was still moving. Thinking fast, I turned around, slid lizard-like downwards, and grabbed the front of the chair. The ground continued to move further and further from my skis. I hung there screaming, looking like something from the movie Dumb and Dumber.

The lift controller began to shout at high decibels short English words, which called into question my character and integrity. So I did what people with cords hooked to their legs pay $60 to do: I jumped.

It is difficult to say how much time passed before I hit the ground, surrounded by skiers with open mouths.

I blacked out for a few seconds then lay on my back stunned, thinking I am dead. Heaven is very cold. And white. Or maybe I'm just paralysed. I can't move my toes. I can't feel my hands.

Suddenly the face of an angel descended through the clouds. Blonde curls lit up the sky. Should I pretend to be dead or badly injured? I was still delusional. I could use this to my advantage.

Then the angel laughed. How I loved that laugh.

Could I have known that I stood a much better chance of getting to the bottom of the ski hill alive than I did of marrying this girl, I might not have smiled so widely. But as she helped me up with both mittens, I realized I had fallen head over heels in love.

There's a sentimental feeling that overtakes me each and every Christmas. Call me nostalgic, call me crazy, I've always had the sense that beyond the giving of gifts, the carving of the turkey, the carols and crisp moonlit nights lies something infinitely more magical. It is the divine fulfilment of a romantic longing that lies within each and every heart.

Christmas is a bold reminder of the arrival of One who pursued us beyond reason. Of a Saviour who would rather die than live without us.

This year I will celebrate once again with a blonde named Ramona. We're not as young as we were all those years ago, so we will likely forego the ski trip in favour of a slow glide around our town's outdoor ice rink.

I think this time I can get her to hold mittens with me.

Subscribe to our monthly magazine
Date:
December 6, 2011
Type:
Topic:
Back to Top