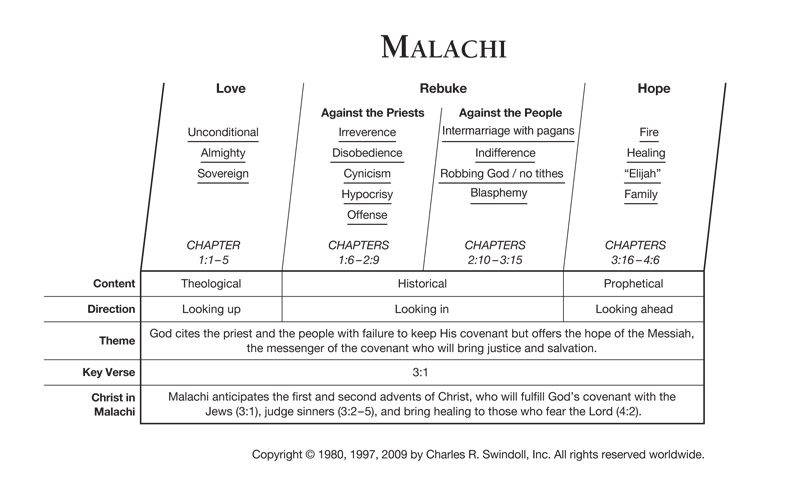 The final book of the Old Testament, Malachi received its name from its author (Malachi 1:1). In Hebrew, the name comes from a word meaning “messenger,” which points to Malachi's role as a prophet of the Lord, delivering God's message to God's people.1 Malachi offered no other identifying information about himself, leaving out markers typical of other prophets such as his father's name or the current leader of Israel.

However, based on the content of the book, it becomes clear that Malachi delivered his message of judgment to a Judean audience familiar with worshipping at the temple in Jerusalem (2:11). The people of Judah had turned away from the true worship of the Lord, leaving themselves under judgment and in need of salvation.

Malachi certainly wrote to the people of Judah (Malachi 1:1; 2:11), but the historical setting becomes clearer in Malachi 1:8. Here the prophet used the Persian word for governor, indicating a time period between 538–333 BC, when the Persian Empire ruled the Promised Land. Malachi also wrote about the corruption of the temple sacrifices, meaning that he likely delivered his message many years after the Israelites rebuilt the temple in 515 BC. The prophet's concerns mirror those of Nehemiah's, suggesting that Malachi prophesied to the people while Nehemiah left the city for several years, beginning in 432 BC (Nehemiah 13:6).

WHY IS MALACHI SO IMPORTANT?

Malachi's unique position as the final book of the Old Testament offers a glimpse into the hearts of Israelite men and women, members of a nation that had been specially chosen by God, descendants of Abraham, and inheritors of the rich tradition of the Jewish people. Their history told of glories like the exodus from Egypt and the faithfulness of God to King David. But they had also experienced the judgment of wandering in the desert and the shame of exile from the Promised Land.

At the time of Malachi, well over a thousand years after Abraham's era, the Israelites had the advantage and weight of history on their side; they could see the shining rewards of faithfulness and the punishments associated with judgment, even to the point of being uprooted from their land. But even then, with all that perspective, the book of Malachi teaches us that they still strayed from the Lord's path. They needed God's intervention as much as ever, so this book, as a final statement of judgment in the Old Testament, anticipates God's saving work through the Messiah, Jesus Christ.

WHAT'S THE BIG IDEA IN MALACHI?

The people of Judah began to be exiled from the Promised Land in 605 BC, returning from Babylon seventy years later. By the time of Malachi, they had been back in the land for more than a hundred years and were looking for the blessings they expected to receive when they returned. Though the temple had been rebuilt, the fervour of those early returning Israelites gave way to a thorough apathy for the things of God. This led to rampant corruption among the priesthood and a spiritual lethargy among the people.

Malachi came along at a time when the people were struggling to believe that God loved them (Malachi 1:2). The people focused on their unfortunate circumstances and refused to account for their own sinful deeds. So God pointed the finger back at them, and through Malachi, God told the people where they had fallen short of their covenant with Him. If they hoped to see changes, they needed to take responsibility for their own actions and serve God faithfully according to the promise their fathers had made to God on Mount Sinai all those years before.

Throughout Israel's history, the nation failed and God called His people back to Himself. Each time, Israel would fail again, prompting the cycle to begin again. God's final word of the Old Testament concerns judgment for sin and testifies to our inability to love Him without the help of His grace.

Do you struggle to follow God consistently? Malachi's call prompts us to live faithfully before God and offers hope that God is not yet through with extending mercy to His people (Malachi 3:1; 4:2, 5–6).

Find resources in the book of Malachi in our resource library.