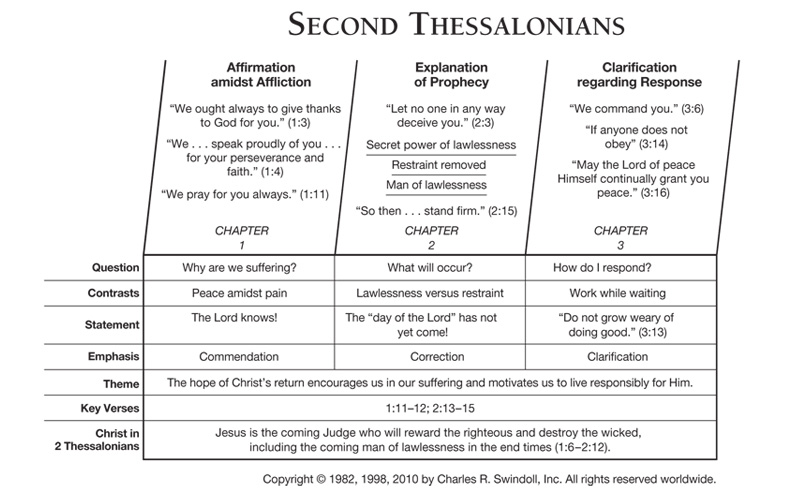 Just because Paul visited a city, preached the gospel for weeks or even months, and founded a church by guiding converts to the faith, this did not protect the new church from scheming heretics. In fact, the immaturity of any new church presented a perfect target for those who meant to mislead and distort the truth. Paul, worried about his friends and their troubles with false teachers, wrote this second letter to the believers at Thessalonica in the hope of encouraging their young but burgeoning faith.

Paul wrote 2 Thessalonians from Corinth in AD 51 within months of writing the first letter. Since the subject matter of the second letter has a number of thematic similarities to the first, Paul probably had received a second report from the city detailing continuing questions or problems regarding the end times. Several of Paul's references indicate that some in Thessalonica were deliberately misleading these new believers, even to the point of false teachers forging letters to make them look as if they had come from Paul (2 Thessalonians 2:2). The apostle, therefore, took extra care in this letter to make sure the Thessalonians understood not only his views on the end times but also what his handwriting looked like, so they would be able to identify letters as authentically his (3:17).

WHY IS SECOND THESSALONIANS SO IMPORTANT?

Second Thessalonians distinguishes itself by the detailed teaching it presents on the end times. False teachers had been presenting fake letters as if from Paul and telling the Thessalonian believers that the day of the Lord had already come. This would have been especially troubling to them because Paul had encouraged them in his previous letter that they would be raptured before the day of wrath came upon the earth.

So Paul explained to them that this future time of tribulation had not yet come because a certain “man of lawlessness” had not yet been revealed (2 Thessalonians 2:3). Comparisons with other passages in Daniel, Matthew, and Revelation reveal this man to be none other than the Antichrist. But Paul encouraged the Thessalonians not to worry, because the Antichrist would not come until a mysterious restrainer—the Thessalonians apparently knew his identity—was removed from earth (2:6-7). The identity of this restrainer has been heavily debated, though due to the nature of the work the restrainer does, He is likely the Spirit of God working redemptively through the church. When the believers leave the earth in the rapture, all who remain will experience the wrath of the tribulation.

WHAT'S THE BIG IDEA IN 2 THESSALONIANS?

The Apostle Paul, in concern for the Thessalonian believers who were trying to stand firm in their faith under pressure from false teachers, taught the Thessalonians in this letter that their hope in Christ's future return should serve as an encouragement to them in their suffering, motivating them to live responsibly for Him. Paul always connected his teaching on Jesus with the practical growth he expected to see as a result of such a deeply held faith.

Discipline and self-control are two qualities that quickly slip away in a society so focused on the material that its people forget the spiritual realities that should dictate their lives. Fat with financial and material success, many people today have descended into an unruly and lazy existence that possesses little care for others, especially of the kind that might conflict with our personal, fleshly desires. How does your daily life come into conflict with God's desire for you to live well and serve others?

Paul knew that hope in Christ would encourage perseverance in godly living. And hope is exactly what we lack today, one of the great roots of this gradual slip into increased self-centeredness. As you read the words of 2 Thessalonians, allow them to rekindle your hope and fan into flame your desire to live in God-honouring, industrious ways.

Find resources in the book of Second Thessalonians in our resource library.