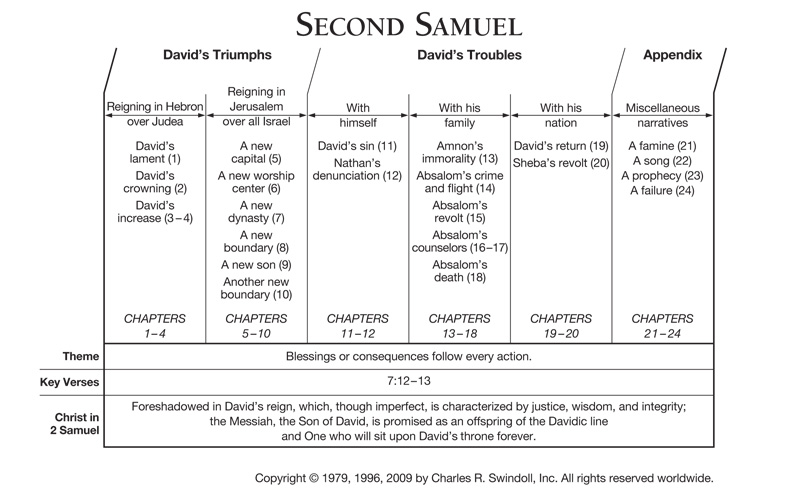 As we noted in the previous chapter, 1 and 2 Samuel form one book in the Hebrew Bible. The Septuagint, the Greek version of the Bible, first divided these books into two parts. Although the book does not name a specific author, the material was compiled from documents written and collected by the prophets Nathan, Gad, and Samuel—the prophet for whom the book is named (1 Chronicles 29:29).

Second Samuel is set in the land of Israel during the reign of David and follows the course of his forty years as king of Israel (1011–971 BC).

WHY IS SECOND SAMUEL SO IMPORTANT?

First Samuel introduces the monarchy of Israel, and 2 Samuel chronicles the establishment of the Davidic dynasty and the expansion of Israel under God's chosen leader. The book opens as David learned of Saul's death. His lament over the deaths of Saul and of Jonathan (2 Samuel 1:19–27), David's unlikely best friend, demonstrated David's personal grief over their demise. The Lord soon set David over the tribe of Judah (2:4) and then over all Israel as His anointed king (5:3), uniting all twelve tribes into a tight-knit nation.

The first 10 chapters show David as victorious in battle, praised by the people, compassionate to the sick and poor, and righteous in God's sight. We see David dance before the Lord in the streets of Jerusalem as his men brought the Ark of the Covenant back home (6:12–16). We also meet Mephibosheth, the crippled son of Jonathan to whom David extended grace, “for the sake of [his] father Jonathan” (9:7).

Despite the turmoil in his later years, David enjoyed the Lord's forgiveness and favour. His genuine sorrow and regret over his sins revealed his repentant heart, with which the Lord was pleased.

WHAT'S THE BIG IDEA IN 2 SAMUEL?

Key to the book and to the entire biblical record is 2 Samuel 7:16, “Your house and your kingdom shall endure before Me forever; your throne shall be established forever.” This divine promise marked the beginning of an additional covenant, called the Davidic covenant, in which God promised an eternal throne to the house of David. “Because of David's faith, God did not treat [David's] descendants as He had treated Saul's. Sin would be punished, but David's line would never be completely cut off.”1

“My covenant I will not violate,
Nor will I alter the utterance of My lips.
Once I have sworn by My holiness;
I will not lie to David.
His descendants shall endure forever
And his throne as the sun before Me.
It shall be established forever like the moon,
And the witness in the sky is faithful.” (Psalm 89:34–37)

God's unconditional promise to David would be fulfilled ultimately in David's descendant Jesus Christ. The covenant also included a continuing promise that the people of Israel would have a land of their own forever.

David is known as a “man after [God's] own heart” (1 Samuel 13:14) because, though he sinned greatly and made mistakes, he acknowledged those failures and repented before God. Repent means to turn away from sin and turn toward righteousness. Our Father knows we are not perfect. So His Son, Jesus Christ, paid the price for our sins so that we can become righteous in God's sight through faith. And although our salvation is secure, our daily sins can hinder our relationship with God. When we confess our sins, turning to the Lord in humility, He will forgive us and restore our relationship with Him.

The Apostle James has written what might be an appropriate epitaph for David. It can be yours, too: “Humble yourselves in the presence of the Lord, and He will exalt you” (James 4:10).

Find resources in the book of Second Samuel in our resource library.