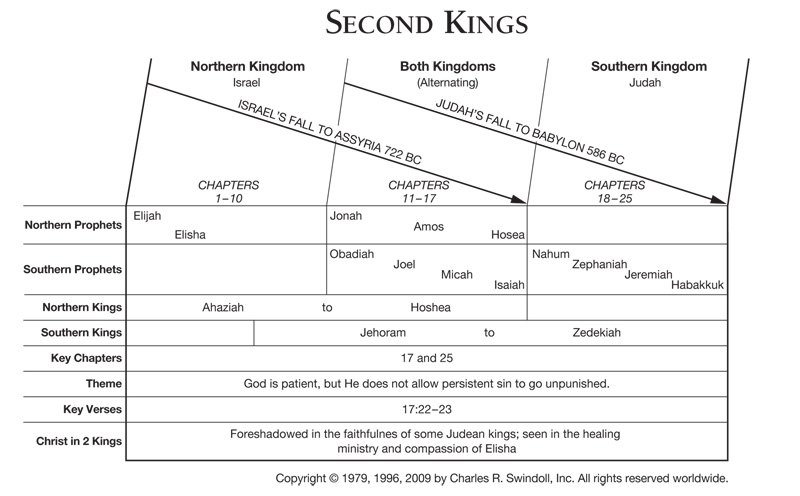 As we noted in the previous chapter, 1 and 2 Kings originally comprised one book of history. The author is neither indicated in the text nor known by scholars. He was most likely a prophet, because many of the historical events were recorded in light of Israel's and Judah's faithfulness—or unfaithfulness—to their covenant with God. Ezra, Ezekiel, and Jeremiah have all been named as possible authors.

Second Kings continues the history of the divided kingdom, picking up the story around 853 BC. In 722 BC, the powerful nation of Assyria invaded the northern kingdom, scattering and taking captive the people of Israel. Only Judah remained intact. But then Assyria suffered a stunning fall to the Babylonians, who took the Assyrian capital of Nineveh in 612 BC. By 605 BC Babylon dominated Judah, had taken some captives away, and in 586 BC Babylon destroyed Jerusalem and took additional prisoners into captivity. Many people who were considered valuable to the invaders, such as the prophet Daniel and members of the royal family, were taken to Babylon early on. By the end of Kings, the people of God no longer inhabited their Promised Land. Many areas of the country had been rendered virtually uninhabitable due to the razing, burning, and other destructive tactics of the Babylonian army, while the people had been enslaved, scattered, and decimated by their enemies.

The book ends with an epilogue of sorts, giving a peek into the good fortune of Jehoiachin—Judah's last true ruler before a series of puppet kings were installed by Babylon. If Jeremiah did write much of Kings, he could not have written this section, set in Babylon, for he had been taken away to Egypt years earlier.

WHY IS SECOND KINGS SO IMPORTANT?

Second Kings features many unique events and people. Two people were raised from the dead (2 Kings 4:32–37; 13:20–21). The prophet Elijah left this earth without dying (2:1–18); Enoch was the only other man in the Bible to do so (Genesis 5:21–24). The waters of the Jordan River rolled back twice (2 Kings 2:8, 14). These and other miraculous events testify to God's continuing work among His people.

The time period covered by this book saw the emergence of the first writing prophets in Israel. Amos and Hosea went to the people of Israel, while Isaiah, Joel, Micah, Nahum, Habbakuk, Zephaniah, and Jeremiah prophesied in Judah, both groups calling the people to repentance and warning them of God's coming judgments. The author devoted extensive space to Elisha's ministry after Elijah was taken to heaven, giving special attention to the numerous miracles Elisha performed.

None of the kings of Israel are described as having done right in God's eyes; each led the people deeper into idolatry. Several of Judah's kings were righteous, notably Joash, Uzziah, Hezekiah, and Josiah. Hezekiah held off the Assyrians by trusting in the Lord for deliverance. Josiah later instituted an even greater spiritual reformation. Neither effort, however, was enough to stem God's eventual judgment on the nation in fulfilment of the curses of the Mosaic Covenant (Deuteronomy 28).

WHAT'S THE BIG IDEA IN 2 KINGS?

World affairs played a heavy role in Israel's and Judah's destinies. Yet, the author of 2 Kings directly connected the Israelites' apostasy—led by their wicked kings—to their national destruction, pointing it out as God's judgment on His wayward children. Despite repeated warnings from God's prophets to turn from their ways and return to God, the people continued to live in sin. To their regret, they did not believe that God would allow their nation to be ruined by foreign invaders.

Yet God did not forget His promise to David, either. God saved a remnant from among the people and kept the royal line intact so that one day His people could return to their land to await the promised Redeemer.

Second Kings teaches an important life lesson: actions have consequences. “Repent! Sin will incur judgment,” God warned in effect through the prophets. Israel and Judah learned the hard way that God means what He says.

How will we learn? Consider your heart. Is it hard, resistant to God's call? Or can you acknowledge your sin and turn back to Him?

Find resources in the book of Second Kings in our resource library.