From Regime to Revolution to Restoration: God’s Well-Laid Plan for Insight for Living Romania 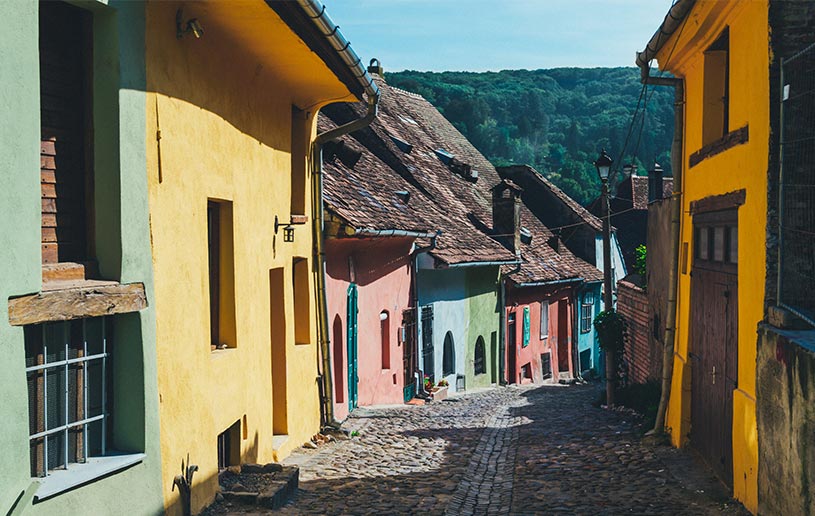 Anda Constantin shifted her weight from one foot to another and peeked out past her father’s leg. She looked forward, then backward. She couldn’t see the end of the line in either direction. She turned her worn punch card over in her little hand. It was her ticket to a half a loaf of bread that day, maybe three ounces of meat that week. Every person in that line that stretched beyond her vision held a similar card, even her father, a dedicated member of the Communist Army. His rank and service made no difference; hunger was the standard in Bucharest, Romania, in 1980s.

For Anda’s first eight years of life, her mother scraped together meager meals of cabbage and potatoes and their family’s rations of bread and meat. Anda had no clue that in other parts of the world, children ate until they were full, had closets full of toys, and never knew a day without heat or electricity.

She also had no clue who Jesus was. Like many people living in Romania at that time, she had never even heard His name.

Nearly 170 miles away in Transylvania, Romania, young Ben Mogos collected eggs from the hens in his grandparents’ backyard. Unlike Anda, Ben knew the taste of milk and butter and eggs—foods his family made and gathered themselves on the small plot of land where their house stood. At Christmastime, he received oranges, chocolate, bananas, and toys. But his family, too, knew the harsh, stripping hand of communism.

Communists had confiscated all their farmland, everything other than the house and its yard. Ben’s family had to portion their electricity. Heat, as well as running water, was scarce. His father—a preacher—and his grandfather—also a preacher—were enemies of the Regime, simply because they were Christians committed to the Great Commission.

Ben scanned the horizon carefully. He glanced toward the stacks of hay where his father hid his Bible from the police. At that moment, inside the house, his mother was tapping away at her illegal typewriter, making copies of illegal Christian resources. His father and grandfather were making plans to show the Jesus film again under the cover of night and behind closed curtains.

They had received the film, as well as the resources his mother copied, from Campus Crusade for Christ teams who smuggled Christian materials into Romania—people like Insight for Living Ministries’ board member Ney Bailey. Ben’s neighbours would come to watch the film that night, their interest piqued by whispered mentions of a God who loved them so much He gave up His own son to save their lives. They would leave with truth in their hands and hearts.

A chill ran up Ben’s neck as he kept watch for anyone approaching the house. He had heard many times the stories of those who dared to proclaim the Gospel in his communist country. Many preachers spent decades behind bars. Some endured torture. Others had “accidents” that took their lives.

In 1989, Ben and Anda, still miles apart, celebrated their eighth and ninth birthdays respectively. By December, they were also celebrating new life in their country. Revolution had finally arrived in Romania, setting the people free from communism.

“I remember,” Ben recollects, “when communism fell and people could just go out and buy ice cream. Whenever you wanted, you could buy it! I’ll never forget how colourful and wonderful that felt.”

As political revolution shed new, colourful light across the once grey and dark country, an equally miraculous revolution happened in Anda’s home. She shares:

My father was raised by a believing grandmother who prayed for him to come to faith. However, at age 14, he went to the military high school. Nobody even bothered to tell my father that God didn’t exist. They assumed that, as an intellectual, he didn’t believe. They did tell him he wasn’t allowed to talk to Christians or read the Bible. It was only a matter of time before he became an atheist and, eventually, an officer for the Regime.

He became passionate about communism and atheism. In fact, he had a dream to write a book using arguments from the Bible to prove that God didn’t exist. But after the Revolution, the people’s interest in spiritual things grew and we started having freedom of the press. My father began reading articles that talked about the spiritual world.

At first, he was just interested in these articles. But then, one day, he realized he actually believed there was something beyond this material world. And then, remembering the Gospel his grandmother had shared, he thought, “If there IS something more, if God exists, then I have to repent!” I was 11 years old when he became a believer in 1992, and it was the first time I heard the name of Jesus.

Anda’s entire family came to know Jesus as their Saviour through her father’s testimony. Soon after, with a diagnosis of leukemia, he found himself medically discharged from the military. He decided to go to seminary and become a pastor—a path that led him back to the military, this time as the very first evangelical chaplain in the history of Romania.

Anda recalls, “My father said, ‘You know, I’ve fought against God in the Romanian military, and I now want to honor Him in the same place.’”

Luxuries like “ice cream whenever you wanted” served as the cherries on top of the now freely flowing necessities of meat, running water, heating, and electricity that the people of Romania finally had. Ben’s father and grandfather no longer had to proclaim the Gospel against terror. But they faced a new obstacle: a spiritual famine every bit as severe as the physical one communism had imposed. Anda’s father wasn’t the only new believer who joined the effort to feed Romanians’ starving souls. Within a year of the Revolution, Ben took up the mantle too:

It was on a Sunday evening in 1990 during a revival in a small Baptist church that I surrendered my life to Christ and trusted Him as my Saviour. My parents had moved from Transylvania to the south of the country as missionaries, finally free to plant churches and share the Gospel. It was during high school that I was called by the Lord to full-time ministry....

About seven years after Ben’s profession of faith, the Lord finally crossed his and Anda’s paths. They were teenagers and at a church camp outside of both of their hometowns. Anda caught Ben’s eye when she fell into a river! He caught her heart when he sat with her afterward to keep her company as the sun dried her embarrassment and her clothes.

They spent hours talking and growing a friendship at that camp. But then they returned to their homes and didn’t hear from or see each other...until they both “happened” to be called to ministry and both “happened” to end up at the same Bible college in Bucharest.

“I was in this new city where I knew no one...and then, there she was,” Ben remembers with a smile. “She showed me around the city, we began dating, and we married our junior year.”

And a son wasn’t the only adventure the Lord had in store for this pair He brought together for His glory.

From Regime to Revolution, from Transylvania to Bucharest, and eventually from Bucharest to Dallas, Texas, and back—the Lord has paved the way for these two Romanians to change their country together with Insight for Living Ministries...and YOU. They’ve tackled the spiritual hunger in their homeland with the same fever and commitment their fathers did, remembering the first time they felt full 30 years ago, first in their bodies and then in their souls. To them, the love of Christ and the nurturing truth and practical help of His Word add far more colour and wonder to their world than even ice cream to a little boy free to enjoy it for the first time.