Following the God Bigger than Our Dreams: Zygmunt Karel and Insight for Living Polska 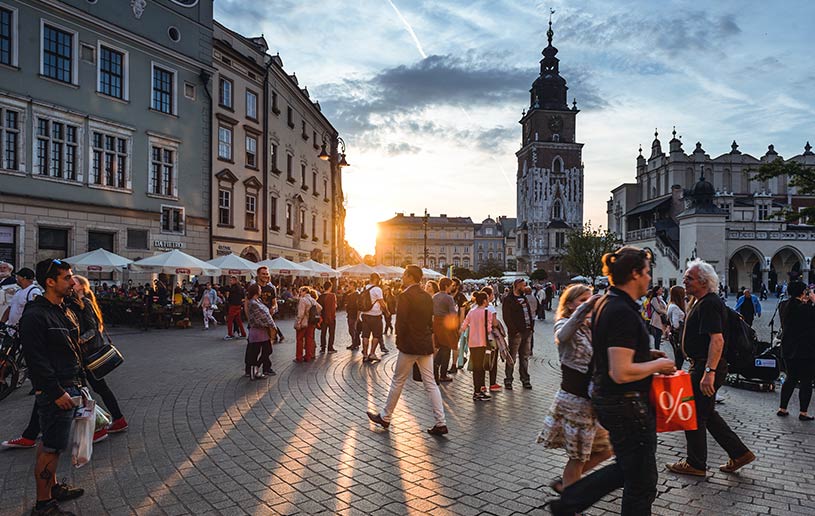 All of my life, God put into my heart a dream of starting a seminary in my country.

Those words come from Zygmunt Karel, a man who at five-years-old witnessed communists beating his father for preaching the Gospel in Poland. Zygmunt will never forget his mother holding him back from rushing to his father’s defence. “If we attack them,” she warned, “They will put your father in prison, this time for good.” Zygmunt will also never forget what happened after the officers left. His father gathered the family together, asked them to kneel, and then led them in prayer for the men who had just beaten him.

That wasn’t the last time the Karel family endured persecution. “Oh, yes,” Zygmunt says with a humble smile, “My father was arrested many times. I’ve been arrested too.”

Born in 1950, Zygmunt spent his childhood in South Poland, where pollution hung so thickly in the air, even the birds coughed. Despite the heavy hand of communism in those years, Zygmunt doesn’t remember a time when he didn’t know about Christ. His parents, as well as his uncle’s family who lived closed by, were dedicated believers. His father, a pastor, was in and out of prison, accused of being an American spy because he proclaimed God’s Word—an accusation that wasn’t reserved only for adults. Zygmunt recalls praying for the United States in their home as a family. But his father forbade him to speak of America at school, fearing he too would end up in prison.

“Growing up in a Christian home,” Zygmunt says, “was a gift. But there was one negative thing.” That one thing, according to Zygmunt? Not the constant fear or persecution. It was how long it took him to realize being part of a Christian family wasn’t enough; he needed to make a personal decision to follow Christ. Zygmunt recalls the day he made that choice:

I was on a tram, packed in like a sardine, traveling between cities. I was about 15 years old, and I was reading a booklet about the Gospel from a revival convention. All of a sudden, I realized that to be a child of God, I had to make the decision for myself. My father was standing far from me on the tram, and I shouted to him, “Dad! Did you know salvation has to come by faith?” That was my first realization that I needed to commit my life to God’s hands, and I did.

With the same inextinguishable faith of his father, teenaged Zygmunt felt called to full-time ministry. When he told his parents, tears streamed down his mother’s cheeks. His father, terrified that his son would experience the same hardships he had, said firmly, “Over my dead body!”

“I loved my father. I obeyed my father,” Zygmunt says with a chuckle. “But I knew God had called me to be a pastor, and there was no way I wouldn’t be.” That was 1965; Zygmunt began pastoring in Poland in 1971. Advanced studies took him to Warsaw, where he earned a PhD in theological sciences from Christian Theological Academy. While studying theology in Warsaw, Zygmunt pastored two, small churches in his home area, South Poland. After 10 years ministering in Silesia (South Poland), he traveled to Switzerland for further study. Eventually, he landed in beautiful Kraków, Poland, where he pastored for seven years.

In 1988, the Lord began to make Zygmunt’s lifelong dream of a seminary a reality. The first step? A prompting in the heart of Dr. Mark Young, now the president of Denver Seminary, to move from the United States to Poland. The Lord connected Zygmunt and Dr. Young, bringing together Zygmunt’s passion and training with Dr. Young’s heart for missions and education from Dallas Theological Seminary (DTS) and Trinity Evangelical Divinity School. For two years, Zygmunt and Dr. Young worked together to develop a seminary in Poland. Due to communism, they planned to open the institution “underground.” But then these two believers with big dreams saw the Lord perform a miracle: In 1989, Poland came out from under communism! “God gave us freedom!” Zygmunt exclaims. “Suddenly, we had an open road before us!”

In 1990, Biblical Theological Seminary, completely unhindered, opened its doors in Wrocław, with Dr. Young serving as academic dean and Zygmunt as president. In 1995, Dr. Young returned to his alma mater DTS as a professor. Zygmunt remained president of the seminary in Poland until 2005, teaching theology, homiletics, and spiritual leadership. Today, Biblical Theological Seminary is the only fully accredited evangelical, interdenominational seminary in Europe.

In 2005, Zygmunt moved to New York to help grow a church in a Polish community in Brooklyn. Then in 2008, Dr. Young invited him to visit DTS, where Dr. Chuck Swindoll was chancellor. Zygmunt had met Chuck at an earlier visit, but this time, he also met Cynthia and Insight for Living Ministries. Shortly thereafter, he returned to Poland with a mission: to start Insight for Living Polska (Poland).

Zygmunt shares, “Since day one, I was translating Chuck’s sermons into Polish. By 2009, the office was open, and I started to record. Since that time, we have produced almost 1,000 broadcasts!” Zygmunt’s efforts have resulted in more than 500 hours of solid, practical Bible teaching airing across Poland on two different stations—and that teaching is meeting an astounding need!

Through both world wars, God sustained the people of Poland through the Roman Catholic Church. Those deep roots have produced an uncontested reverence for the Catholic church and a people who consider themselves very religious. But, as Zygmunt points out, “Religion doesn’t necessarily go together with knowledge of the Gospel.”

Catholicism gives many Poles a sense of belonging; they feel secure in the church, thinking the church takes care of their salvation. There’s a prevailing mindset that if a person goes to mass, participates in the sacraments, and listens to the right ordained clergy, he or she is OK. A personal spiritual life doesn’t matter; what that person does at home doesn’t matter. As pastor of Insight for Living Polska, Zygmunt considers it his privilege to introduce his countrymen and women to the God of grace and the truth of the Bible.

“We love our country,” Zygmunt says. “We want to present the Bible as clearly as possible. People here tend to see everything non-Catholic as a threat, but listeners like Chuck’s messages because he appeals to their minds.” And that’s no small feat!

“We never had in Poland anything like a national Reformation,” Zygmunt explains. “Obviously, the Reformation flowed into Poland, but it never touched the whole country. Therefore, the mentality of the average Pole is not inclined to the Bible or to biblical vocabulary.” English takes a lot of vocabulary from the Bible, and English-speakers—Christian or otherwise—use it in everyday life. But, Zygmunt reveals, that isn’t the case with Poles. “We have to be really careful,” he says, “to teach the Gospel in a way that people will be able to understand.”

The challenge is even greater among the young population who tend to resist reading. It’s a “generation of pictures,” Zygmunt says—people who have grown up with a constant onslaught of images, giving them less patience for things like sitting down and studying the Bible. “So,” Zygmunt says with determination, “We are looking for creative ways to engage people of all ages in digging into the Bible for themselves.” Zygmunt and his team do so with an emphasis on excellence and professionalism. Those hallmarks of Insight for Living Ministries as a whole, Zygmunt believes, will draw in Polish Catholics and Protestants alike.

As pastor of Insight for Living Polska, Zygmunt answers calls and letters from listeners who contact the ministry with questions about the Bible and what they’ve heard on the program. He also fills pulpits throughout the country as needed and sets up teaching conferences.

His main responsibility, though, has been to translate, contextualize, and record Chuck’s messages for a Polish-speaking audience. Now, with our new Searching the Scriptures training curriculum and Vision 195, he will also be training pastors and lay leaders to study God’s Word and prepare and deliver sermons using the same methods Chuck does every Sunday.

Looking back, Zygmunt sees clearly how the Lord prepared him to be a teacher of the Word during his years serving at the seminary he dreamed of and started with Dr. Mark Young. With gratitude and amazement, he also sees how the Lord led him away from that dream to an even bigger one. Through Vision 195, Zygmunt will be teaching and training Polish-speakers on a scale much larger than he ever imagined! And through our Polish-language website, he has the opportunity to reach millions more.

More than 41 million people from 46 different countries speak Polish as their primary language.1 In some of these countries, the Polish-speaking population is large; in others, it is minimal. Regardless, any Polish-speaking individual living anywhere in the world with access to the Internet can receive solid, practical Bible teaching in their heart language through Insight for Living Polska’s website!

What’s more, in 2013, the Lord led the perfect ministry partner to Zygmunt, just as He did years before with Dr. Young. Jakub Cieslar, who goes by Kuba, has served alongside Zygmunt as executive director of Insight for Living Polska for more than six years. Kuba handles the logistics of the office, freeing Zygmunt to focus on translating Chuck’s messages and preparing for Searching the Scriptures training sessions. These two men from different generations share a deep passion for their country and for God’s Word, making them the perfect match to reach and make disciples of Poles of all ages!

Zygmunt’s childhood and 49 years of ministry in Poland have brought him hardships and heartaches most of us will never bear. But if you have the pleasure of meeting him, don’t count on hearing about his trials—unless you ask exactly the right questions. Even then, he’ll answer truthfully but quickly turn the focus to the gifts God has provided: his loving and encouraging wife of 47 years, Maria; their five children and five grandchildren; the small but hardworking team he leads as pastor of Insight for Living Polska; the beauty of his country and its people; and above all, the opportunity to know Jesus Christ personally and introduce others to Him.

“Insight for Living Polska exists for one reason,” Zgymunt says with an earnestness in his voice and a weathered faith in his eyes. “We want people to get to know the Bible and, through the Bible, to get to know Christ and experience His constant presence, hope, and help in their lives—no matter what they may face."